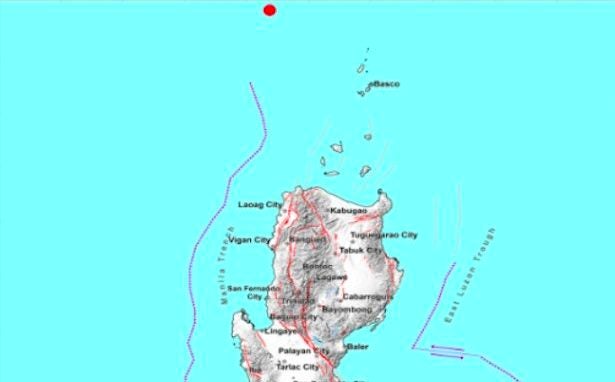 Map shows epicenter of the earthquake in the waters off Batanes. (Map from Phivolcs)

MANILA, Philippines — A magnitude 5.1 earthquake hit the waters near Batanes at 9:43 p.m. on Tuesday, according to the Philippine Institute of Volcanology and Seismology (Phivolcs).

The epicenter of the quake, which was of tectonic origin, was located 190 km northwest of Itbayat, Batanes, at a depth of 13 km.

No damage was reported, but nearby residents should brace for aftershocks, said Phivolcs.

Just a few minutes before, at 9:34 p.m. a magnitude 4.8 tectonic earthquake also rocked the same area, with an epicenter 205 km northwest of Itbayat.

A few hours after both quakes at 11:01 p.m., another tectonic earthquake was recorded in the same area 170 km northwest of Itbayat at a depth of 33 km.

Responding to appeals for help, the Inquirer is extending its relief to the families affected by the recent twin earthquakes in Batanes.