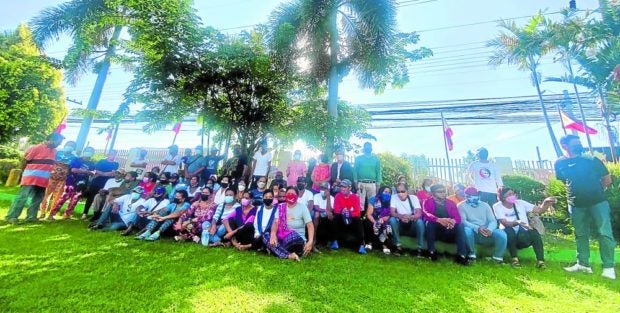 FILE PHOTO: The 83 farmers, land reform advocates and their supporters gather outside a court in Capas, Tarlac, on Friday, June 17, 2022, before their arraignment for the illegal assembly and malicious mischief charges filed by a cooperative for allegedly destroying a portion a 200-hectare sugarcane plantation in Barangay Tinang, Concepcion town. —PHOTO COURTESY OF BAGONG ALYANSANG MAKABAYAN

MANILA, Philippines — A Tarlac court has cleared farmers and advocates – or the so-called Tinang 83 – of illegal assembly and malicious mischief charges.

A June 27 order by Presiding Judge Antonio Pangan of the 2nd Municipal Circuit Trial Court of Capas-Bamban-Concepcion in Tarlac granted the motion to quash the Information (charge sheet) for illegal assembly and malicious mischief against the 83 accused.

The resolution of the prosecutor states there is enough evidence to support the case of illegal assembly because the accused, who were armed and ready to resist any force, attended a meeting to commit a crime.

But the court ruled that “the responding police officers who arrested the accused were not able to confiscate, nor presented to this Court to serve as prima facie evidence, any firearm from any of the accused.”

It also noted that the prosecutor’s resolution may have been based on the joint affidavit of the arresting officers stating they have seen some of the 83 accused carrying firearms.

“Without the so-called ‘smoking-gun,’ [i.e. firearms], such baseless allegation will not support the requirement of sufficiency of ‘the acts or omissions complained of as constituting an offense,” the court pointed out.

The court also took note of the fact that a similar case has been filed before a Regional Trial Court in Capas, Tarlac – which was also dismissed.

“It follows that the assailed Information for illegal assembly must be quashed for being duplicitous and for failure to allege facts constituting the particular kind of illegal assembly falling under the jurisdiction of the first-level court,” it said.

In the case of malicious mischief, the Tarlac court said not all the elements of the case are present because the farmers have claims to the property being holders of certificates of land ownership award (CLOA).

The court said a CLOA is “sufficient proof to entitle the holder the right to possess lands.”

The court added that authorities also failed to provide evidence that the Tinang 83 caused damage out of hatred, revenge, or ill motive.

It further said that alleging a conspiracy among all the 83 accused cannot be entertained because “it appears to be baseless and rather sweeping.”