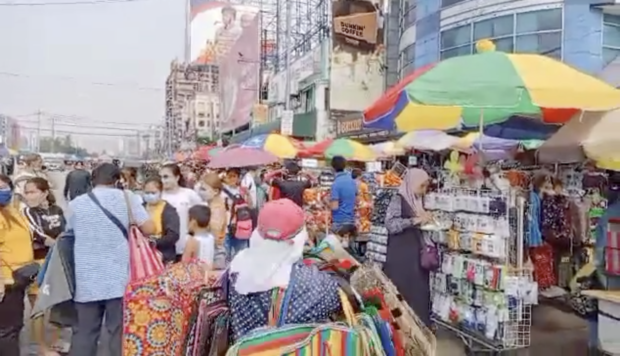 FILE: A group of shoppers troop to Baclaran to shop. Screenshot from Radyo Inquirer

The WHO earlier recommended a five-percent threshold for COVID-19 positivity rate.

“NCR positivity is 5.5% as of yesterday,” Octa Research fellow Guido David told INQUIRER.net in a message.

“We are seeing an increase in cases in Metro Manila, Western Visayas, and a few other provinces. It’s becoming a cause for concern, though not cause for alarm yet,” he said on ANC’s Headstart.

Meanwhile, the capital region’s one-week growth rate of cases was at 76 percent, he added.

NCR’s average daily attack rate — or the average number of new cases per 100,000 individuals — stood at 1.68, still within the ideal figure of below seven.

Metro Manila’s reproduction number, on the other hand, was at two percent as of June 18, higher than experts’ recommendation of less than one.

A reproduction number of two means that each COVID-19 patient may transmit the virus to two other people, David noted.

Based on the latest data from the Department of Health, the country listed an additional 409 COVID-19 cases on Wednesday, of which, 218 were in NCR.

David on Tuesday projected that COVID-19 infections may reach 1,000 per day by the end of June or the first week of July.

Lithuanians near Kaliningrad put faith in NATO after Russia’s threats