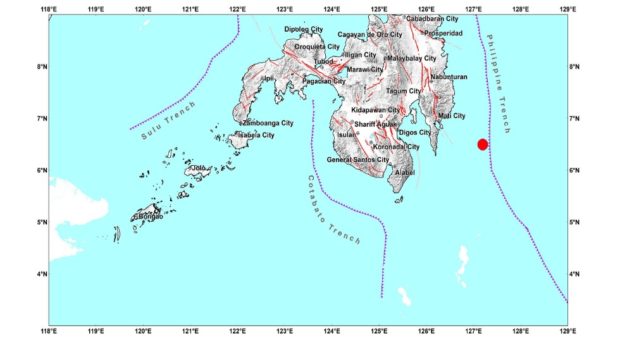 MANILA, Philippines — A magnitude 5.2 earthquake struck waters off Davao Oriental on Wednesday morning, according to the Philippine Institute of Volcanology and Seismology (Phivolcs).

The earthquake was recorded at 4:37 a.m. Aftershocks are possible but significant damage is unlikely, state seismologists said in a bulletin.

Intensity IV, characterized by “moderately strong” shaking, was felt in Tarragona and Caraga, Davao Oriental, while Intensity III or “weak” vibrations were observed in the municipality of Manay, also found in the same province.

Instrumental intensities were likewise reported in these areas:

The agency also noted the tremor was tectonic in origin and had a depth of 62 kilometers.