INFLATION QUICKENED in May to its highest level in three and a half years, fueled by soaring food and transport costs, the statistics agency said on Tuesday.

The overall prices of consumer goods and services accelerated by 5.4% year on year in May, faster than the 4.9% in April and 4.1% a year ago, preliminary data from the Philippine Statistics  Authority (PSA) showed.

This matched the median estimate in a BusinessWorld poll conducted late last week. It also hit the midpoint of the 5-5.8% forecast range given by the Bangko Sentral ng Pilipinas (BSP) for the month. 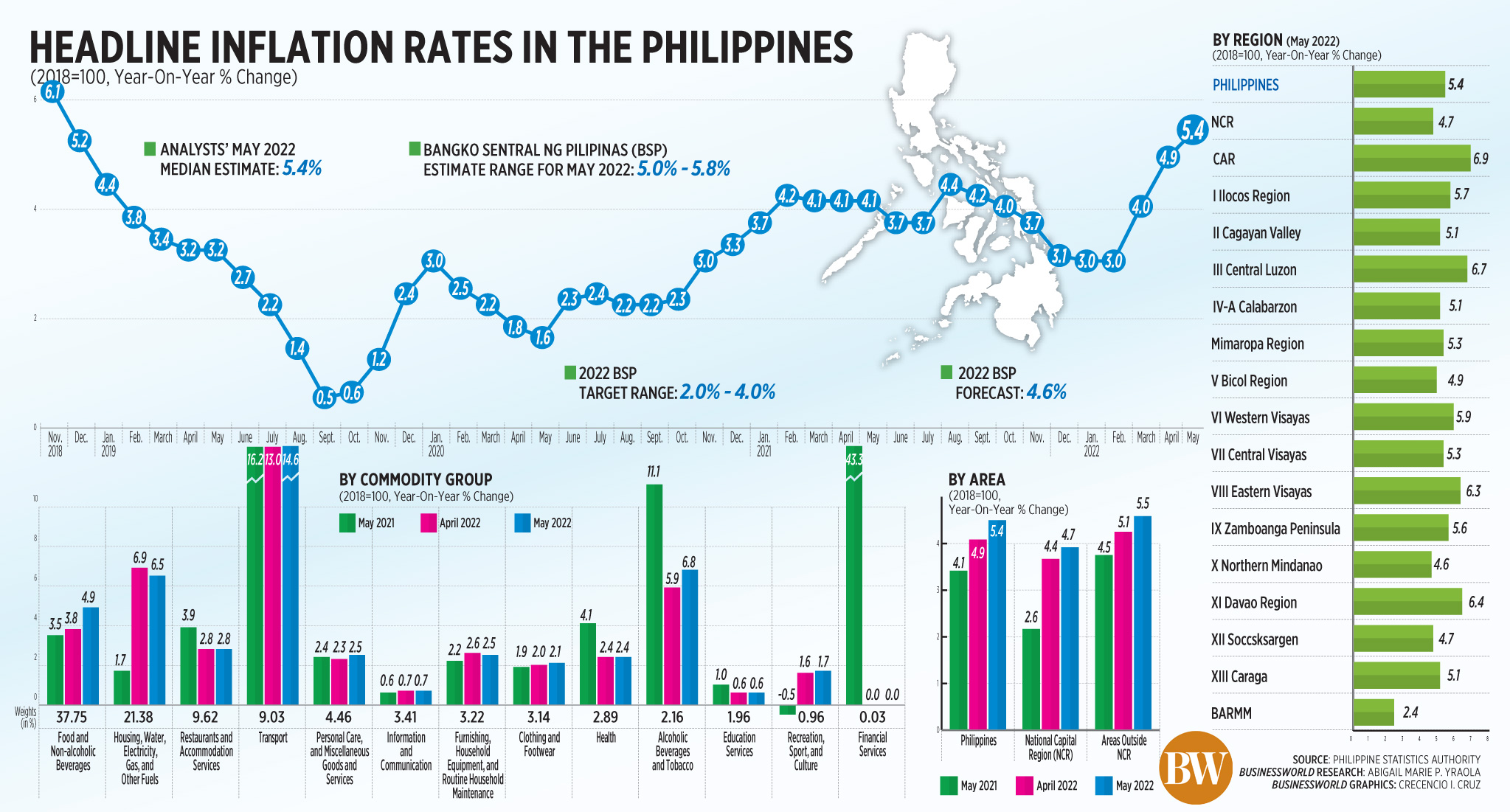 It was the second straight month that inflation zoomed past the central bank’s 2-4% target band.

The inflation print in May was the fastest pace in 42 months or since the 6.1% year-on-year growth logged in November 2018.

Month on month, consumer prices went up by 0.4%. However, it increased by 0.5% on a seasonally adjusted month-on-month basis.

Inflation has averaged 4.1% annually so far this year, still lower than the revised 4.6% forecast by the central bank.

At a press briefing on Tuesday, National Statistician Claire Dennis S. Mapa said the May inflation print was driven by the rise in the prices of food and non-alcoholic beverages, utilities, and transport.

Prices of the heavily weighted food and non-alcoholic beverages jumped by 4.9% year on year in May, fueled by the 15.2% increase in vegetables, tubers, etc. and 6.2% jump in fish and seafood.

“We saw (in April) that the increase in transport costs was having a spillover effect on the food basket. This month, we have seen there is now a big effect,” Mr. Mapa said in Filipino, adding that they have not seen any supply issues.

Mr. Mapa also pointed out that rice inflation has been well managed. Inflation for rice dropped by 0.3% in the National Capital Region (NCR), and increased by 1.8% in areas outside the NCR.

Transport costs likewise climbed by 14.6% in May, as pump prices continued to climb amid volatility in the global market. Gasoline rose by 47.2%, while diesel surged by 86.2%.

The ongoing Russia-Ukraine war has pushed prices of oil above $100 per barrel amid concerns over supply. Russia is the world’s second-largest supplier of crude oil. Since the start of the year, the prices of gasoline, diesel and kerosene have gone up by P23.85, P30.30, and P27.65 per liter, respectively, according to the Energy department.

The food-alone index showed an increase of 5.2% in May, higher than the 4% in the preceding month and 3.7% from a year ago.

Meanwhile, inflation as experienced by the poor households jumped 4.3% in May from 3.8% in April. However, it was lower than 4.5% in May last year.

“The balance of risks to the inflation outlook now leans toward the upside for both 2022 and 2023. The upside pressures emanate from the potential impact of higher oil prices, including on transport fares, as well as the continued shortage in domestic pork and fish supply. Meanwhile, downside risks are linked mainly to the potential impact of a weaker-than-expected global economic recovery,” BSP’s Mr. Diokno said.

The Labor department said a minimum wage increase ranging from P30 to P110 will be implemented in 14 regions starting this month.

The National Economic and Development Authority (NEDA) said the extension of an executive order that lowers tariff rates for rice and pork imports, as well as cuts tariffs on corn will help ease global inflationary pressures. Executive Order (EO) No. 171 also temporarily removed the 7% duty on coal imports, in a bid to lower electricity prices.

Mr. Diokno said the central bank will continue to review the inflation and growth outlook ahead of the June 23 policy meeting.

“The pace and timing of any further monetary policy actions by the BSP shall be guided by data outcomes, in keeping with the BSP’s price and financial stability objectives,” Mr. Diokno said.

The Monetary Board hiked benchmark interest rates for the first time since 2018 by 25 basis points (bps) on May 19 to quell rising inflationary pressures.

“[The central bank] may have to actually hike (rates) more to avoid a sharper weakening of the peso which, in turn, will cause inflation to accelerate further,” Mr. Neri said.

ING Bank N.V. Manila Senior Economist Nicholas Antonio T. Mapa said he expects BSP to continue to hike at the next few meetings “to get ahead of the curve.”

He said inflation will likely be elevated for the rest of the year, accelerating to a high of 6.8% in the fourth quarter and averaging 4.8% for the year.

“Given this outlook, a 25-bp hike is fully expected while a more forceful 50 bps may actually be necessary to get ahead of the curve,” Mr. Mapa said.

Mr. Neri projects inflation to settle above 4.5% this year, “more so if the conflict in Eastern Europe persists.”