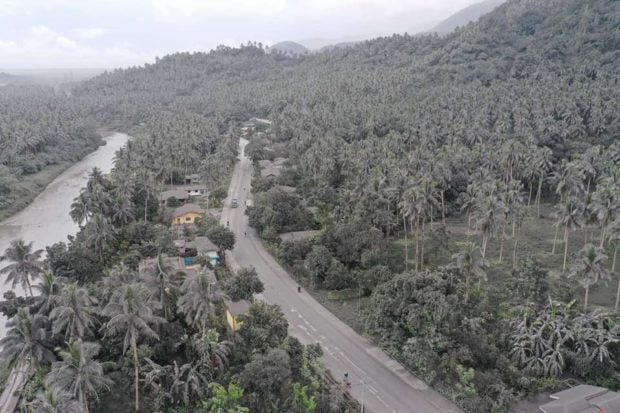 A thick layer of ash caused by the phreatic eruption of Bulusan Volcano blanketed the villages of Bacolod and Buraburan in Juban town in Sorsogon on Sunday. (Photo from Sorsogon Provincial Information Office)

Solidum noted that inhaling fine ash would be an irritant to the respiratory system.

“Now, the danger there would be if the fine ash would be inhaled, then it can be an irritant to the respiratory system and those affected especially will be those with respiratory ailment or heart ailment,” he said on ANC’s Rundown.

“What is important is for them to avoid inhaling the fine ash by wearing N95 masks or staying indoors during this whole event,” he advised.

There was not much sulfur dioxide emitted by the Bulusan Volcano but a smell of the gas has been observed, said Solidum.

Should sulfur dioxide concentration rise, the director said that the provincial government can order a temporary evacuation.

“Now, if, in case, the sulfur dioxide concentration increases, it’s also an irritant to the respiratory system and people might get dizzy,” Solidum said.

“So, if in case there’s heavy ashfall or the smell of sulfur dioxide, then the local government can direct a part of the community to be evacuated temporarily until the ashfall event or the passage of gases has been finished,” he suggested.

According to the National Disaster Risk Reduction and Management Council, 180 residents or 50 families have evacuated in Juban town of the province.

Alert Level 1 or low-level unrest was hoisted over Mount Bulusan after it had a phreatic eruption which lasted for 17 minutes Sunday morning.