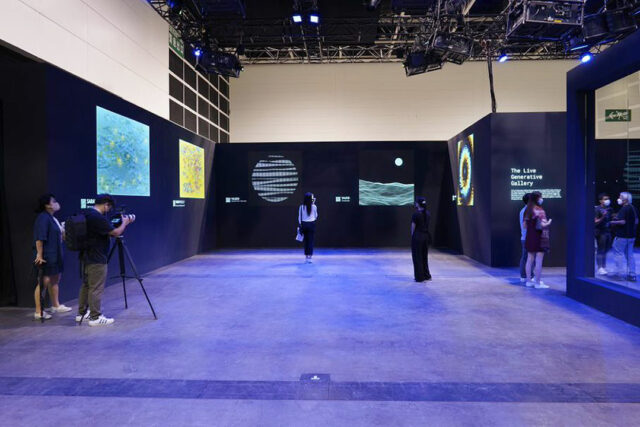 As a digitally native extension of traditional art, non-fungible tokens (NFTs) were an interesting platform where painter Charles Bjorn Z. Calleja could release his animation — and like many Filipino artists, this revelation led him to mint his first NFT in 2021.

“I don’t actually consider myself a digital artist. My animations are based on paintings, and I’ve been exhibiting my work for as long as I can remember in physical galleries. I do animations to see movement… It’s an extension of my art practice,” said Mr. Calleja.

In a video interview with BusinessWorld, he recounted that he posted animations online just for fun until his friend introduced him to the Tezos-based marketplace Hic et Nunc.

“I didn’t really have a platform for my animations and NFTs became a good way to market and monetize them since I didn’t intend to show the work in galleries,” he said.

Since then, Mr. Calleja has had his NFT works shown at various galleries and art shows, the most recent of which was at Art Basel Hong Kong 2022, at the Tezos-based exhibition NFTs + The Ever-Evolving World of Art held from May 27 to 29.

He also added that NFTs don’t necessarily go against traditional art, since they can bridge the gap between long-standing art institutions and new artists and collectors.

“The traditional and digital art worlds can help each other with this technology.”

TEZOS BLOCKCHAIN
Art Basel’s NFT section was hosted on Tezos, an energy efficient alternative to better-known blockchain networks Bitcoin and Ethereum. What sets it apart from those is that it has a lower minting cost and a smaller carbon footprint.

Katherine Ng, head of marketing and operations in Asia Pacific at blockchain consultancy firm TZ APAC, said that Tezos’ momentum (up over 60% in the last month) has continued even amid downturns in the market and declines in NFT prices.

For the Tezos community, NFTs “bridge a gap in the art world, allowing artists to connect with new collectors around the world, and institutions and sell their work to anyone at any time,” she said via e-mail interview, echoing Mr. Calleja’s hope for NFT art.

TZ APAC helped Art Basel Hong Kong present its NFT and generative art exhibition that featured over 20 generative and NFT artists from across the globe.

This potential hasn’t been lost on other traditional art institutions either, with Sotheby’s vice-president, contemporary art specialist, and digital art co-head Michael Bouhanna tweeting just last week: “Getting into Tezos just now! Which artists should I look at?”

Last month, the biggest Tezos marketplace, Objkt.com, surpassed $100 million in total sales since its launch in 2021.

Generative art, in particular, has enjoyed growing popularity. Defined as digital art with assets fed into a machine algorithm, it taps into the programmable aspect of new media which can also be interactive.

“It’s an incredibly exciting development in the NFT art ecosystem. There are more and more platforms focused on this art form, not only within the Tezos ecosystem with FXhash, but across other blockchains,” said Ms. Ng.

EXPANSION OF THE ART SCENE
Mr. Calleja said that avenues like Art Basel Hong Kong and Art Fair Philippines, where he also exhibited his works, will effectively spread the word about NFT art.

“I think it helps to educate the local art audience about NFTs in general… Most of the artists I know who are minting are doing digital work and it’s only a few who are really into the galleries, into the fine art side of things, so I think it helps bridge the gap and introduce NFTs as a platform for new media art, as video art, and a lot more,” he said.

With market-based institutions from auction houses and museums to art fairs and galleries slowly opening up to the idea, it’s only a matter of time until the art scene is expanded to include more and more NFT artists.

For TZ APAC, this will surely occur in no time in Southeast Asia, which enjoyed rapid digitalization during the pandemic. Tezos as a platform also takes care of the issue of high minting costs.

“When I think of the market demographics of Southeast Asia as a region characterized by a young, digitally-savvy, mobile-first population, the openness towards digital assets comes as no surprise,” said Ms. Ng.

She added that the development of this trend has shown the asset class “no longer being limited to niche circles but also established galleries, artists, and festivals.”