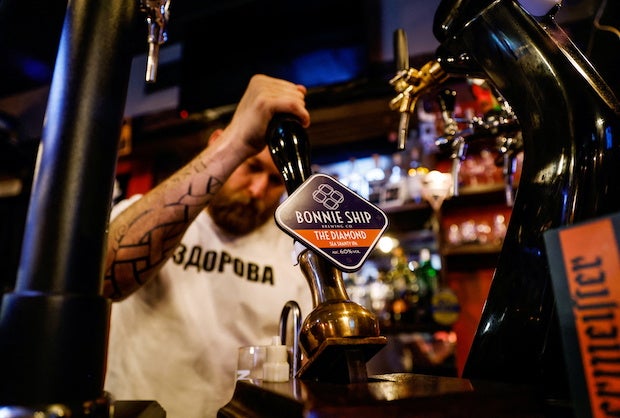 A bartender pours beer at a bar in Moscow, Russia June 2, 2022. (REUTERS/Maxim Shemetov)

“Sorry, that was the last bottle of Czech beer we had,” said a waiter at a central Moscow restaurant, a month after Russia sent troops into Ukraine and the West imposed sweeping sanctions.

More than 100 days into what Russia calls a special military operation in Ukraine, foreign alcohol is still available in Moscow pubs, but the once ample reserves are dwindling.

“Some pubs accumulated large stocks when it all started. But, as far as I know, there have been no new deliveries ordered and confirmed after Feb. 24,” said Alexander Skripkin, who manages two bars in Moscow.

Many foreign companies — including leading Western brewer in the country Carlsberg , Anheuser-Busch InBev, and Heineken — have suspended sales in Russia, and the shipping trade has plummeted.

That has pressured the economy and affected the habits of Russians used to a lavish selection of foreign-made alcohol.

“The beer situation is very cheerless,” said Anton, a 36-year-old IT expert who works for a state financial organization in Moscow.

“Not to mention Paulaner, Pilsner Urquell, and other tasty stuff, I’m not at all confident if Russian beer is here to stay. There are problems not only with beer imports but even with imports of hops,” he added.

Russian breweries depend heavily on imports of raw materials, such as hops.

“Complications with sending money to suppliers in Europe and America, as well as the disruption of supply chains, are now the two most difficult issues,” Russia’s association of beer producers said, citing Beer Resource, one of Russia’s largest distributors of raw materials for breweries.

In early March, Carlsberg, AB Inbev, and Heineken halted the production and sale of their flagship beers in the country and they have since said they will sell their businesses there.

The world’s biggest foreign container lines — including the top three MSC, Maersk, CMA CGM — have temporarily suspended cargo shipments to and from Russia, while European Union countries sharing borders with Russia and Belarus have barred cargo vehicles registered in those countries from entering.

“There is no Guinness any longer and it won’t return, at least for now,” a bartender at the White Hart, a large English-style pub in central Moscow next to the central bank, said. It used to sell the stout for 690 roubles ($10.83) per pint.

Diageo, which makes Smirnoff vodka and Guinness, began its own distribution in Russia in 2006 and once noted enormous growth potential in the country. It said in March it had suspended all exports to Russia as well as local manufacturing of its beers.

But Guinness, which has one-year shelf life when stored in kegs, was still available at two pubs nearby where bartenders said they were selling stocks with little hope they would be replenished any time soon.

“We have stocks that should be enough for half a year,” said a representative of beer importer Nice Beer based in a Moscow suburb.

Russian President Vladimir Putin has said the sanctions will rebound on the West and provide new opportunities for Russian firms.

“Sometimes when you look at those who leave — thank God, perhaps? We will occupy their niches: our business, our production – it has already grown, and it will safely sit on the ground prepared by our partners,” Putin said on May 26.

With foreign alcohol flows drying up, bars and stores are considering locally-produced drinks.

“We’ve started looking for domestic alternatives to foreign beers and, as a result, the selection has changed drastically. Imported alcohol is now 20 to 50% more expensive, while local beers are slightly cheaper than imported ones used to be before Feb. 24,” Skripkin said.