INFLATION likely surged past 5% in May as food and oil prices continued to climb amid tight global supply, according to analysts.

A BusinessWorld poll of 16 analysts yielded a median estimate of 5.4% for May inflation, matching the midpoint of the 5-5.8% forecast by the Bangko Sentral ng Pilipinas (BSP). 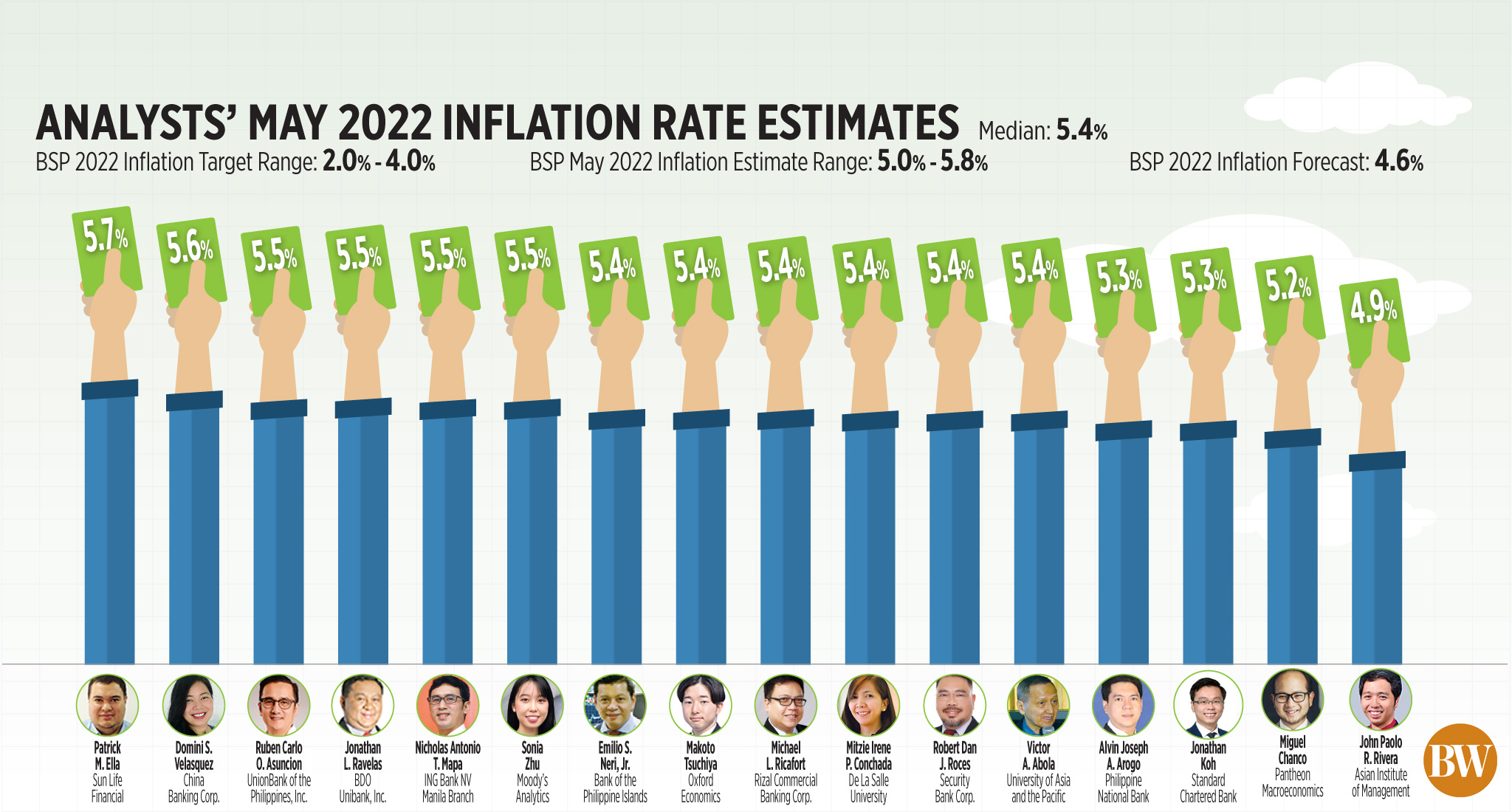 This would also exceed the BSP’s 2-4% target band and the Development Budget Coordination Committee’s inflation rate assumption of 3.7-4.7% this year.

The Philippine Statistics Authority (PSA) will release the May consumer price index (CPI) data on Tuesday.

“Crude oil prices continue to rise and its effects are spreading to other consumer goods and services,” Victor A. Abola, economist at the University of Asia and the Pacific, said.

Since Russia invaded Ukraine in late February, crude oil prices have surged to above $100 per barrel amid concerns over supply.

Data from the Department of Energy (DoE) showed that gasoline, diesel, and kerosene prices have jumped by P23.85 per liter, P30.30 per liter, and P27.65 per liter, respectively, year to date as of May 31.

Wage hikes in 14 regions will take effect this month, while transport groups have filed petitions to raise fares.

“Food, transport and utility costs will be the main drivers for this month’s breach of the inflation target. Supply chain issues have forced up production costs from everything from bread, to fish and vegetables,” ING Bank N.V. Manila Senior Economist Nicholas Antonio T. Mapa said in an e-mail.

The Russia-Ukraine war, as well as the lockdowns in China have caused widespread supply chain disruptions. Global food prices have also gone up as some countries introduced protectionist measures to ensure domestic supply.

“The country’s recent policy to increase imports of food to augment domestic production shortages, are at risk from increasing global food protectionism. Talks between Thailand and Vietnam on possibly increasing rice prices is worrisome given that rice makes up almost 9% of our CPI basket,” China Banking Corp. Chief Economist Domini S. Velasquez said in an e-mail.

However, the rise in inflation may have been tempered by the lower electricity rates and liquefied petroleum gas (LPG) prices, Ms. Velasquez said.

ECONOMIC REOPENING
“On top of supply side pressure, inflation is also likely driven by resurgent demand side inflation as the economy is operating at its new potential capacity. Malls are packed, traffic is back and restaurants are full,” Mr. Mapa said.

The BSP is expected to tighten monetary policy further to curb inflationary pressures.

“BSP would be wise to nip the brewing demand side pressures in the bud with aggressive tightening early on, given the lagged impact of BSP rate adjustments,” Mr. Mapa said, adding that he expects a 50-basis-point (bp) rate adjustment at the Monetary Board’s next policy review.

Security Bank Chief Economist Robert Dan J. Roces said in a Viber message that a 25-bp hike at the June 23 meeting “will be prudent to continue to rein-in inflationary trends.”

“Inflation may slowly cool in the second half of the year on the back of easing oil prices and BSP’s expeditious monetary policy rate hike but for now, inflation will remain sizzling hot,” Analyst Sonia Zhu from Moody’s Analytics said in an e-mail.

In its May 19 meeting, the BSP raised its key interest rate for the first time since 2018 to combat rising inflation. The benchmark rate was increased by 25 bps to 2.25%.