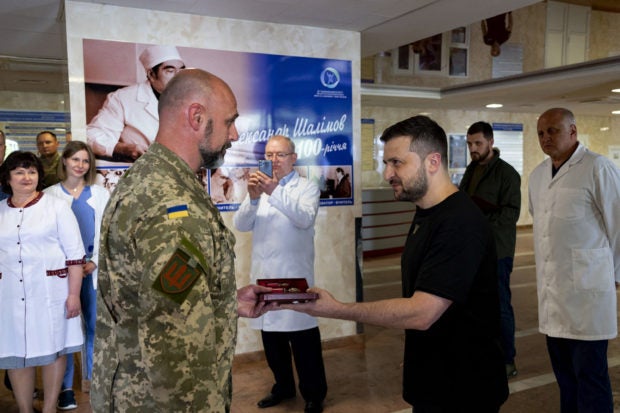 This handout picture taken and released by Ukrainian Presidential Press Service on June 3, 2022 shows Ukraine President Volodymyr Zelensky (R) presenting words to a wounded Ukrainian serviceman at the Shalimov National Institute of Surgery and Transplantology in Kyiv, on the 100th day of the Russian invasion of Ukraine. Zelensky vowed victory on the 100th day of Russia’s invasion on June 3, 2022, even as Russian troops pounded the eastern Donbas region. (Photo by UKRAINIAN PRESIDENTIAL PRESS SERVICE / AFP) /

KYIV, Ukraine – Ukraine’s president vowed victory Friday even as Russian troops pounded the east, and the United Nations pushed to get tens of millions of tons of grain out of the country and avert a global food crisis.

More than 100 days since Russian President Vladimir Putin ordered his troops into Ukraine on February 24, thousands of people have been killed, millions sent fleeing and towns turned into rubble.

The advance of Russian troops has been slowed by a fierce Ukrainian resistance which repelled them from around the capital and forced Moscow to shift its aims towards capturing the east.

“Victory will be ours,” Zelensky said in a video speech.

Later, in his nightly address, he dismissed the Russian army.

“At first it looked threatening. Then dangerous… And now probably just a bitter smile. Because what’s left of it? … War crimes, shame and hatred,” he said.

But Kremlin spokesman Dmitry Peskov said “certain results have been achieved”, pointing to the “liberation” of some areas from what he called the “pro-Nazi armed forces of Ukraine”.

The West has sent ever more potent weapons to Ukraine and piled on ever more stringent sanctions, with the European Union on Friday formally adopting a ban on most Russian oil imports.

At the same time, the United Nations said it was leading intense negotiations with Russia to allow Ukraine’s grain harvest to leave the country.

‘No problem’ to export grain

“I am optimistic that something could give in,” said Amin Awad, the UN crisis coordinator for Ukraine, voicing hope for a “breakthrough.”

Putin in a televised interview late Friday said there was “no problem” to export grain from Ukraine, via Kyiv- or Moscow-controlled ports or even through central Europe.

He said this could be done from the Russian-controlled ports of Mariupol and Berdyansk, or the Ukrainian-held port of Odessa, as long as Ukraine “cleared” the waters around it of mines.

Russian troops now occupy a fifth of Ukraine’s territory and Moscow has imposed a blockade on its Black Sea ports.

The UN has warned that especially African countries, which imported more than half of their wheat consumption from Ukraine and Russia, face an “unprecedented” crisis caused by the conflict.

Food prices in Africa have already exceeded those in the aftermath of the 2011 Arab Spring uprisings and the 2008 food riots.

On Friday, Putin met the head of the African Union, Senegalese President Macky Sall, at his Black Sea residence in Sochi.

Sall told Putin that African countries “are victims” in the conflict.

After the meeting, Sall said he was “very reassured”, adding the Russian leader was “committed and aware that the crisis and sanctions create serious problems for weak economies”.

France’s President Emmanuel Macron, meanwhile, declared Putin had made a “historic” error in starting the war.

But he said he should not be “humiliated,” to leave room for diplomacy.

Putin’s troops are now concentrating in the Donbas, in the east, where some of the fiercest fighting is centred on the industrial hub city of Severodonetsk.

“For 100 days, they have been levelling everything”, Lugansk regional governor Sergiy Gaiday said on Telegram — though, he added, Ukraine was pushing the Russians back.

The agency said the group was travelling “in a vehicle provided by the Russian-backed separatists and driven by an individual assigned by the separatists”.

The French foreign ministry also on Friday said a French volunteer fighter in Ukraine had been killed in combat.

In areas around the capital Kyiv, which Russian troops retreated from at the end of March, some residents are still in desperate need.

At an aid distribution point in Horenka, northwest of Kyiv, a tearful Hanna Viniychuk, 67, said she had come for some basic necessities after losing her home to Russian bombardment.

“I’m grateful for this help,” she said.

‘Nothing to come back to’

Ukrainian troops were still holding an industrial zone in Severodonetsk, Gaiday said, a situation reminiscent of Mariupol, where a steelworks was the south-eastern port city’s last holdout until Ukrainian troops finally surrendered in late May.

About 60 percent of infrastructure and housing had been destroyed, while internet, mobile network and gas services had been knocked out, said the city’s mayor Oleksandr Zaika.

“The shelling is getting stronger every day,” he said.

In the city of Sloviansk, about 80 kilometres (50 miles) from Severodonetsk, the mayor has urged residents to evacuate as bombing intensified with water and electricity cut off.

Student Gulnara Evgaripova, 18, recounted heavy bombardments as she boarded a minibus to leave the city.

“The situation is getting worse,” she told AFP.

Ekaterina Perednenko, a paramedic, said: “I am scared that there will be nothing to come back to.”