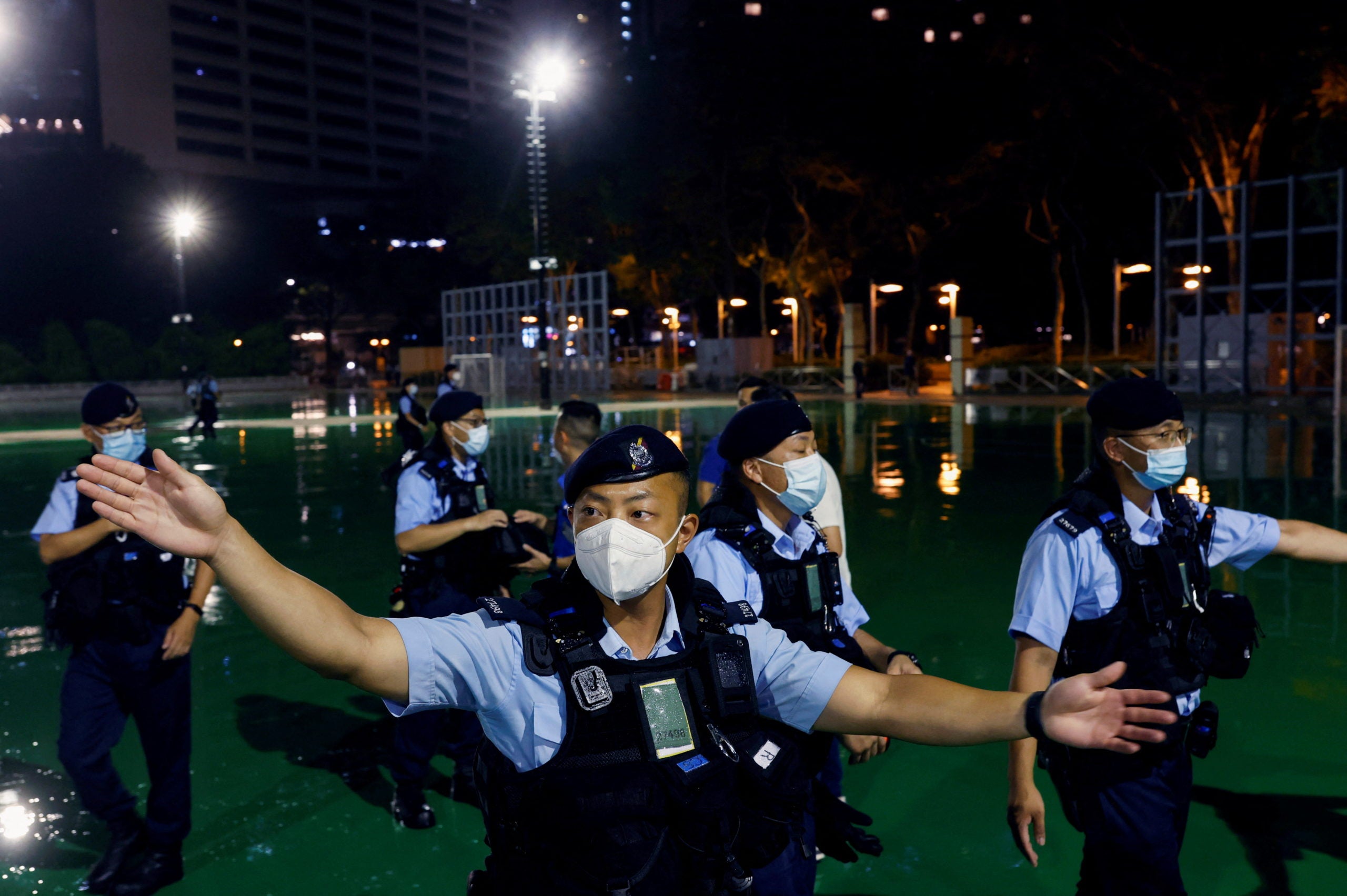 Police officers ask people to leave after announcing the closure of part of Victoria Park, where the candlelight vigil used to be held, a day a head of the 33rd anniversary of the crackdown on pro-democracy demonstrations at Beijing’s Tiananmen Square, in Hong Kong, China, June 3, 2022. REUTERS/Tyrone Siu

HONG KONG/TAIPEI — Hong Kong deployed heavy security near a major park on Saturday as it warned people not to gather to commemorate China’s bloody crackdown on pro-democracy demonstrators in Tiananmen Square 33 years ago, as Taiwan decried efforts to erase the memories.

Saturday marks the anniversary of Chinese troops opening fire to end the student-led unrest in and around the square in central Beijing. China has never provided a full death toll, but rights groups and witnesses say the figure could run into the thousands.

“To remember is to resist,” prominent Chinese human rights lawyer Teng Biao told Reuters from the United States. “If nobody remembers, the suffering of the people will never stop and the perpetrators will continue their crimes with impunity.”

Chinese authorities ban any public commemoration of the event on the mainland, and the Hong Kong authorities have clamped down too.

In Hong Kong’s Victoria Park, where people had come together for an annual vigil before the COVID-19 pandemic hit, authorities blocked off main parts of the venue and warned residents against illegal gatherings.

Soccer pitches and basketball courts, which would usually be full on a Saturday, lay empty as hundreds of police, some with sniffer dogs, patrolled the area.

The city’s leader, Carrie Lam, said this week that any events to commemorate those killed in the 1989 crackdown would be subject to national security laws.

“Everyone is remaining silent because they are terrified of getting arrested,” Hong Kong resident Victor, 57, who asked to be identified only by his first name, said inside Victoria Park.

China imposed a national security law on Hong Kong in June 2020 punishing acts of subversion, terrorism and collusion with foreign forces with up to life in prison.

Since the legislation was imposed, people or organizations affiliated with the sensitive June 4 date and events to mark it have been targeted.

Activists have been jailed, the alliance that organized the annual vigil disbanded, the June 4th Museum closed its physical location and reopened online and two universities removed the Pillar of Shame – an artwork of anguished human torsos – and the Goddess of Democracy statues from their campuses.

Hong Kong has banned the annual vigil since 2020, citing coronavirus restrictions. Some democracy campaigners accuse authorities of using those rules to suppress activism, a claim that officials reject.

Current COVID-19 restrictions allow up to eight people to dine together, though gatherings outside are capped at four people.

Last year, police blocked off the Hong Kong park to prevent people gathering to commemorate the anniversary and arrested the planned vigil’s organizer.

In Chinese-claimed but staunchly democratic Taiwan, where public commemorations are due on Saturday in Taipei, President Tsai Ing-wen decried the “collective memory of June 4 being systematically erased in Hong Kong”.

“But we believe that such brute force cannot erase people’s memories,” she posted on her Facebook and Instagram pages. “When democracy is threatened and authoritarianism in the world is expanding, we need to uphold democratic values.”

Taiwan tends to use the Tiananmen Square anniversary to criticize China and urge it to face up to what it did, to Beijing’s repeated annoyance.

U.S. Secretary of State Antony Blinken, in a statement on Saturday Asia time, called the Tiananmen crackdown “a brutal assault”.

“The efforts of these brave individuals will not be forgotten. Each year, we honor and remember those who stood up for human rights and fundamental freedoms,” he said.

Chinese Foreign Ministry spokesman Zhao Lijian, at a routine news conference on Thursday, reiterated Beijing’s line on the events. “The Chinese government has long ago come to a clear conclusion about the political incident that happened in late 1980s,” he said.

Workers in Calabarzon, Davao Region to get pay hikes — DOLE