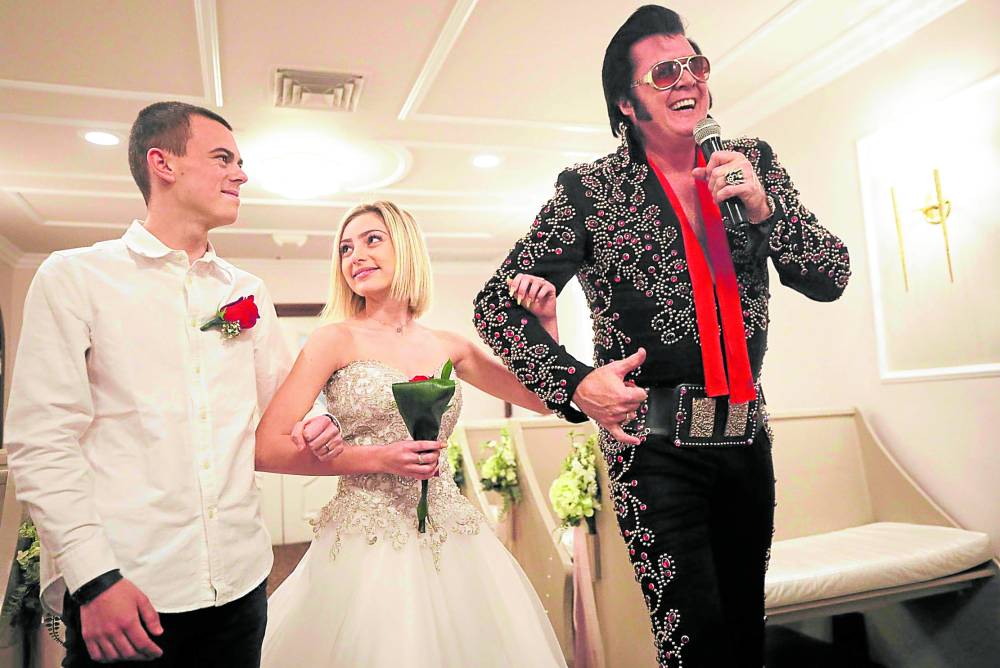 FOOLS RUSH IN In this photo taken on Feb. 20, Elvis impersonator Brendan Paul sings during a “commitment ceremony” for a couple from France at the Graceland Wedding Chapel in Las Vegas, Nevada. Every year thousands of visitors to Las Vegas can’t help falling in love—at least long enough to get married by an Elvis impersonator. —AFP

But the company that controls the rights to the King’s likeness has sparked outrage in Sin City by cracking down wedding chapels offering Elvis-themed nuptials.

The move triggered angry responses from Elvis impersonators, chapel owners, and even the mayor of Las Vegas, who called for a little more open conversation—and less legal action—from the group.

“The Vegas Wedding Chamber shares a concern that many of our chapels and impersonators’ livelihoods are being targeted, especially as many are still trying to recover financially from the hurdles we all endured with Covid shutdowns.”

ABG on Thursday apologized for its initial approach, saying it was committed to protecting Presley’s legacy.

“We are sorry that recent communication with a small number of Las Vegas based chapels caused confusion and concern. That was never our intention,” the company said in a statement to AFP.

“We are working with the chapels to ensure that the usage of Elvis’ name, image and likeness are in keeping with his legacy.”

It added: “From tribute artists and impersonators to chapels and fan clubs, each and every one of these groups help to keep Elvis relevant for new generations of fans.”

But a day earlier, the Las Vegas Review-Journal reported that ABG was now offering chapels financial “partnerships,” including annual licensing deals to continue business as usual.

“That is their solution, to pay $20,000 a year to do what we’ve been doing for the past nine years,” said Kayla Collins, co-owner of the Las Vegas Elvis Wedding Chapel.

“This was not on the table a few days ago. Frankly, I think this thing going to the public has changed their minds.”

Elvis-themed weddings have been a lucrative business in Las Vegas since the 1970s.

Packages today run as high as $1,600 for the Elvis Pink Caddy Luxury Model Wedding Package, which offers couples the chance to be driven up the aisle of the Viva Las Vegas Wedding Chapel by Elvis in a 1964 pink Cadillac convertible.

Weddings are a $2.5-billion industry in Las Vegas, according to the Wedding Chamber of Commerce.

But while Elvis musical tribute acts are freely allowed under Nevada law, businesses using Presley’s likeness simply to attract publicity and customers are not protected.

Harry Shahoian, one of dozens of Elvis impersonators in the city, who officiates at the Graceland Wedding Chapel in Las Vegas, told the Review-Journal that people just “love to be married by Elvis.”