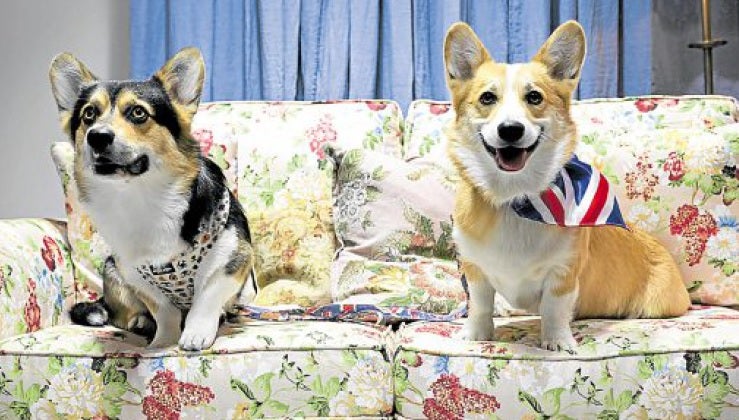 LONDON—Wearing a Union Jack bandana, Obi the corgi stares intently at the camera as he snuggles on a floral sofa with a woman in a tiara.

“The queen would approve,” his owner says after the photo session, giving him a snack.

At the “Corgi Cam” pop-up in London’s historic Leadenhall Market, visitors can take pictures with a rotating team of dogs while dressing up in faux ermine robes, crowns and tiaras.

The 96-year-old queen has kept Pembroke Welsh Corgis since she was 18, and even appeared with her dogs in a spoof James Bond clip filmed for the opening ceremony of the 2012 London Olympics.

“Everyone associates the dog with her majesty and we wanted to be able to celebrate that,” she says.

The breed experienced a rush of interest recently due to the Netflix series “The Crown”, but still remains quite rare in the United Kingdom.

“Many people have never actually met a corgi,” Raby says. “There aren’t many around these days.”

The event runs from midday to 6 pm, with people getting slots of about five minutes each with a corgi.

“They’re used to doing gigs with members of the public and they’re very used to being fussed over,” Raby says of the dogs.

“We’d just seen this and thought we’d come down,” says Ria Measom, 23, posing with her university friend, Megan Oakley, 24, in a red robe, crown and tiara.

“We’ve been queuing for about two hours,” Measom says. “But it was worth it because they brought the corgis out and we could pet them while we waited.”

“It’s good. I think the queen would like it, she should bring her corgis,” she says, giggling.

Another visitor, Zaida Flores, has brought along her parents who are visiting from Ecuador, and they sit together with two of the dogs.

Flores, 31, wears a tiara on her long, green-tinted hair.

“We like dogs, we’re dog lovers so it was a really nice experience,” she says.

Emma Warren-Brown, a dog expert, is watching the sessions and checking the animals are happy and healthy.

“It’s so nice to see the public’s reaction to corgis because actually you don’t see many of them around,” she says. “They are what we would call a rare breed.’’

We’ve really got to hope that their popularity surges. I’d hate to see them die out, because as a breed, that’s what would happen. And of course they are synonymous with the queen,” she adds.

The queen stopped raising corgis in her 90s but kept two “dorgis” — dachshund and corgi crosses — to keep her company in her final years.

One, Vulcan, died in 2020. The other, Candy, was in March 2021 joined by two new corgi puppies — Muick and Sandy — during the coronavirus lockdown.