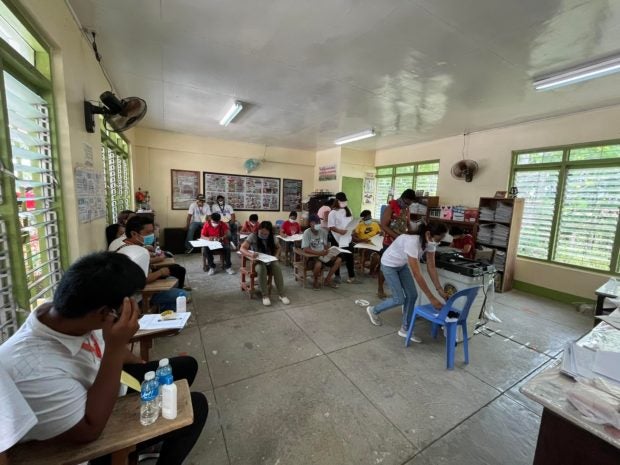 FILE PHOTO: Residents in Pilar town, Abra province cast their votes on Monday, May 9, 2022. Pilar is under the control of the Commission on Elections due to the recent standoff between policemen and a local official. INQUIRER NORTHERN LUZON

MANILA, Philippines — Teachers who worked overtime during the May 9 polls should be given additional honoraria and allowances, Senator Joel Villanueva said.

Villanueva issued the call following reports that the voting process “has been delayed in some areas.”

“[W]e ask the DepEd (Department of Education) to give additional honoraria and allowances to volunteer teachers who worked overtime past 8 hours as poll workers on election day,” he said in a statement on Thursday.

“Their allowance should be commensurate to the weight of responsibility they have performed this election period. It should also factor in the ever-present threat to their safety every election day, and threat to their health because of the pandemic,” he added.

The senator also asked the Commission on Elections (Comelec) to ensure that the allowances for volunteer teachers be given within 15 days after elections in accordance with the law.

The voting period on May 9 opened at 6 a.m. and closed at 7 p.m. However, some precincts remained open beyond voting hours after malfunctioning vote-counting machines reportedly delayed the voting process.

The Comelec said it is yet to decide about the provision of additional honoraria for teachers who were part of the election board in this year’s elections.