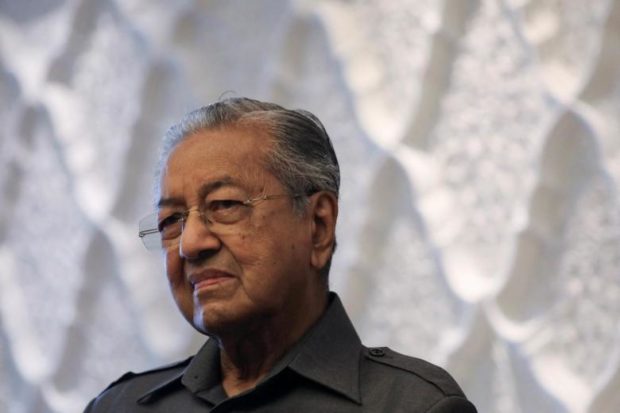 A spokesman from Dr Mahathir Mohamad’s office said that the 96-year-old is warded at the Cardiac Care Unit. PHOTO: REUTERS

KUALA LUMPUR – Former Malaysian prime minister Mahathir Mohamad has been admitted to the nation’s premier heart hospital for the third time in a month, but his daughter said on Saturday (Jan 22) that his condition is stable.

“For the past two days, Tun Dr Mahathir Mohamad has been treated at the National Heart Institute (IJN) following the successful elective procedure on Jan 8, 2022,” said Datin Paduka Marina Mahathir.

“His condition is now stable and he is responding well to the treatment,” she said in a short statement.

A spokesman from Dr Mahathir’s office told The Straits Times that the 96-year-old is warded at the Cardiac Care Unit.

No to ‘negativity’: Marcos Jr. to only do ‘unbiased’ interviews

If she weren’t running for President, Robredo says she would vote for Pacquiao

But the officer could not comment on the seriousness of his health condition that saw him being checked into IJN on Dec 16 for “investigations” before the unspecified elective procedure earlier this month.

Prime Minister Ismail Sabri Yaakob had visited his predecessor at 5.35pm, fuelling earlier rumours that Dr Mahathir had been in critical condition.

He has a history of heart ailments and has had three heart attacks – one in 1989 and another two in 2006.

He underwent a quadruple bypass in 2007.

Dr Mahathir is still active in politics, leading his own opposition party Parti Pejuang Tanah Air, and serving as MP for Langkawi constituency in Kedah.

Prior to last month’s admission, the last time Dr Mahathir checked into IJN was in 2018, after a chest infection.

Ancient Egyptian temple to be restored by S. Korea