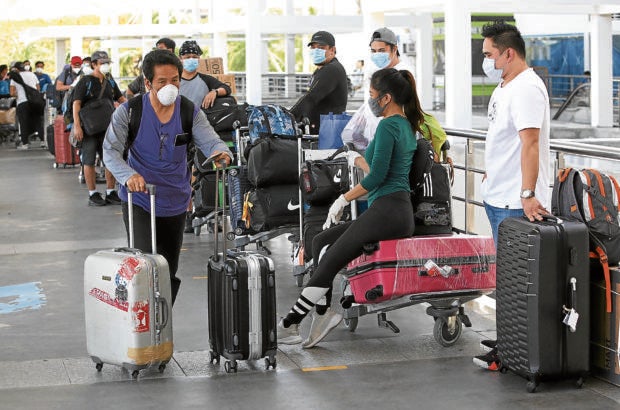 FILE PHOTO: In this June 2, 2020, photo, repatriated OFWs arrive at the NAIA Terminal 2 to board their flights as the NAIA resumes operations starting Monday, June 1, 2020, under the General Community Quarantine. INQUIRER / MARIANNE BERMUDEZ

MANILA, Philippines — Jinggoy Estrada, who is aiming to become a senator again, on Wednesday said he would make sure the newly-created Department of Migrant Workers will have enough funding if he wins in the election this May.

According to him, the new government agency for the protection and welfare of overseas Filipino workers (OFWs) and those aspiring to work abroad “deserves all-out support.”

“Our OFWs are considered modern heroes for their grit, excellence, courage, love of family, and valuable contributions to nation-building amidst the many challenges they face abroad),” he said in a statement.

He then acknowledged that the new department will play a critical role in regulating recruitment, employment, and deployment of OFWs, as it is also empowered to investigate and file cases related to illegal recruitment and human trafficking.

Estrada, a former senator, had served as chairman of the Senate labor committee.