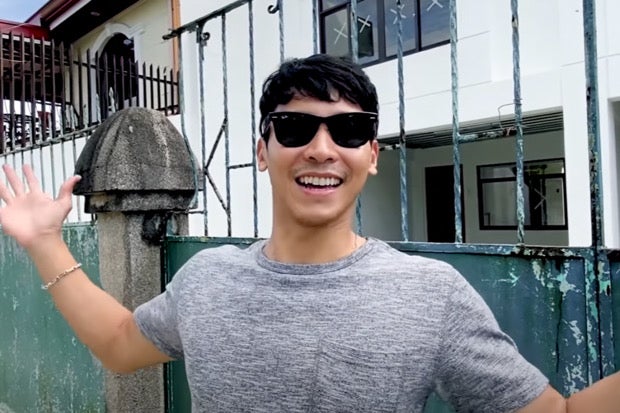 Enchong Dee shared some fond memories of his growing up years, including that of his early years as an athletic swimmer, when he gave fans an online tour of his childhood hometown Naga City, in Camarines Sur.

Dee showed fans a glimpse of his childhood home which, according to him, is far from how it used to be, as seen on his YouTube channel yesterday, Jan. 8. He also showed the church he used to visit as a kid, and tried out Naga’s signature dishes kinunot and kinalasan.

The actor also visited an old pool area where he used to train as a swimmer, noting how it feels “surreal” because it brings back a lot of childhood memories.

“It’s a weird feeling. It’s a happy but a bit sad feeling na wala na siyang (pool) tubig (that it doesn’t have water anymore) but I’m here — a lot of things flashing back, a lot of childhood memories replaying in my mind right now. Masaya pero (I’m happy but) how I wish it’s as healthy as before when I was still swimming here,” he recounted.

“It’s so surreal, nandito na ako ulit (I am here once again). I’m so happy,” he added. “Dito nagsimula lahat, lahat ng pangarap (It all began here — all my dreams).”

Dee also reunited with a friend of his in the latter’s wedding, where he served as his best man, before heading back to Manila.

Dee is facing a cyber-libel case, after he called out Drivers United for Mass Progress and Equal Rights (DUMPER) party list representative Claudine Bautista-Lim’s “lavish” wedding ceremony in Balesin, amid the COVID-19 pandemic and the plight of drivers displaced by it.

According to the congresswoman’s camp, the actor allegedly implied that the money used for the occasion in the exclusive resort supposedly came from the party list’s funds, as per his now-deleted tweet, dated Aug. 14, 2021. Dee continues to keep his silence and is yet to comment on the matter, as of writing. JB