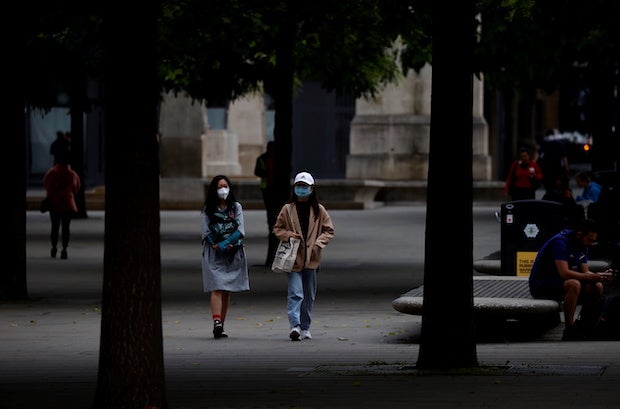 People wear protective masks as they walk through the city center, amid the outbreak of the coronavirus disease (COVID-19) in Manchester, Britain, June 21, 2021. (File photo from REUTERS)

Omicron, dubbed a “variant of concern” by the World Health Organization on Friday, is potentially more contagious than previous variants of the disease, although experts do not know yet if it will cause more or less severe COVID-19 compared to other coronavirus strains.

“Late last night I was contacted by the UK Health Security Agency. I was informed that they have detected two cases of this new variant, Omicron, in the United Kingdom,” Javid said in a broadcast clip.

Essex County Council later confirmed on Twitter that there was a single case identified in Brentwood in the southeastern region of England. The council said it was linked to a single case from Nottingham in central England involving travel to South Africa.

“We are working with regional and local public health officers who are assessing the situation. All close contacts of these individuals will be followed up and requested to isolate and get tested,” the council said.

The health ministry said two individuals and all members of their households were being re-tested and told to self-isolate while further testing and contact tracing were done.

England will also add Malawi, Mozambique, Zambia, and Angola to its travel “red list” from 0400 GMT on Sunday, meaning British and Irish residents who arrive in the country must quarantine in a government-approved hotel for 10 days. Non-residents will be refused entry.