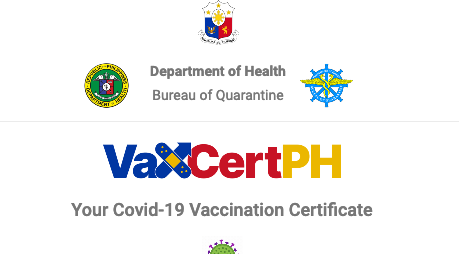 VaxCertPH is as the country’s vaccine certificate system under the Department of Information and Communication Technology (DICT) and Department of Health (DOH).

In a press briefing, Presidential spokesperson Harry Roque announced the approval of Inter-Agency Task Force for the Management of Emerging Infectious Diseases (IATF) Resolution No. 146 which allows for the request of a vaccine certificate for domestic use.

According to DICT Undersecretary Emmanuel Rey Caintic, the digital vaccine certificates comply with the digital guidelines issued by the World Health Organization (WHO).

It aims to represent the certificate holder’s vaccination status.

Initially, it was only offered for overseas Filipino workers (OFWs) who need vaccination certificates for employment.