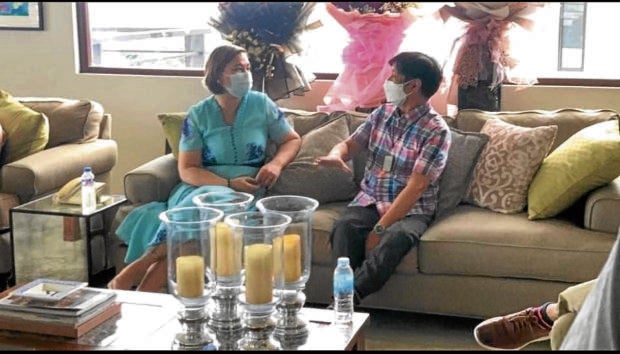 ‘HAPPY OCCASION’ Davao City Mayor Sara Duterte and former Sen. Ferdinand “Bongbong” Marcos Jr. have a chat at the house of Tingog Sinirangan Rep. Yedda Romualdez in Banilad, Cebu City. They were among the guests at the birthday of Romualdez, wife of Marcos’ cousin, Leyte Rep. Martin Romualdez. —PHOTO COURTESY OF BBM 2022-CEBU

(I will tell the truth. We were really shocked. I think it’s the first time that a frontrunner, Inday Sara, opten not to join the race. We really thought she would run for president, while Bongbong only wants to run as vice president. As a tandem.)

(We didn’t think she would not join the race. So things were a bit sidelined. We were really shocked, the whole world was shocked when she did not join. And then Mayor Sara just said ‘Bongbong, run. My brother asked ‘What position will I run for?’ She said ‘Go for the presidency, I will no longer run.’ So we were surprised, we’re really not ready but Mayor Sara said she’s not proceeding.)

Sen. Marcos said her brother was hesitant to run for president at first since he did not have a prepared senatorial slate, a party to run under and a vice presidential running mate in mind.

(Lucky for us, for some reason, Bongbong is leading far and away in various surveys.)

Still, Sen. Marcos said she is hoping that Duterte-Carpio will change her mind and run in tandem with her brother since this would make “life easier.”

(All of us want that because that would make life simpler, we can clinch the votes in the North and in the South. Life would be easier this way.)

“I’m hoping, nagdadasal pa rin kami… We have to give her some space. Bigyan ng konting panahon,” she added.

Speculations regarding a possible tandem between Duterte-Carpio and Marcos Jr. resurfaced after the two met in Cebu last week.

, said the two being in Cebu at the same time was “just another beautiful coincidence.”


260 more detainees in Angeles City get jabs vs COVID-19