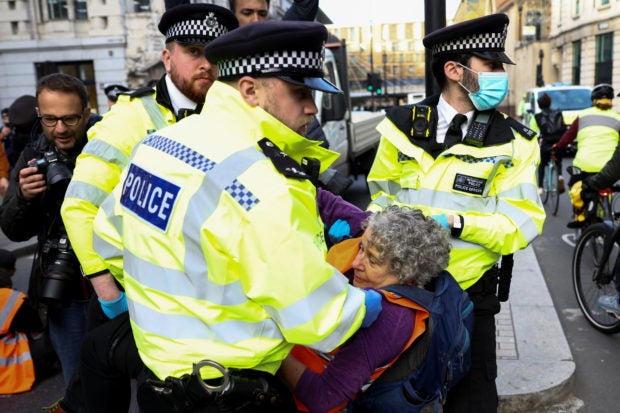 The protests by Insulate Britain, a group demanding that the government provide more insulation for millions of homes, have previously brought chaos for drivers and long tailbacks, mainly on the M25 orbital motorway around the capital.

The group suspended its campaign on Oct. 14 but on Monday about 50 activists blocked Upper Thames Street, Bishopsgate and Limehouse Causeway in and around the City of London, the group said in a statement.

“We are making use of every avenue of existing law to try to prevent the continued life-endangering action being carried out by Insulate Britain, which is causing intolerable disruption to motorists’ lives and livelihoods,” transport minister Grant Shapps said in a statement.

Insulate Britain was not immediately available to comment on the injunction. Earlier on Monday the group said the public should know that one way or another Britain would have to stop emitting carbon.

Most homes in Britain are heated using gas boilers.

While the government has launched initiatives to persuade homeowners to install less carbon-intensive heating sources and install more insulation to reduce heating use, Insulate Britain has said they are insufficient.

The resumption of the blockades coincides with the run-up to the United Nations COP26 global climate conference, which starts in Glasgow next week.


Amihan brings rains to most parts of Luzon on Tuesday