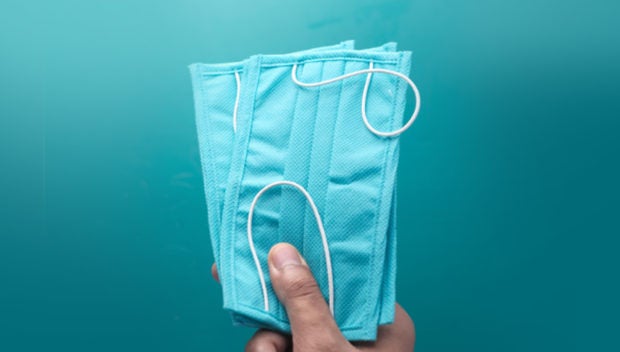 MANILA, Philippines—The Pharmally scandal shoved to center stage the roles that middlemen play in purchase contracts, which are not considered as illegal.

However, it is considered a red flag when the middlemen earn billions from questionable transactions while many Filipinos suffer and battle the impact of the COVID-19 pandemic.

The ongoing Senate blue ribbon committee investigation into transactions between the Department of Health (DOH), Procurement Service-Department of Budget and Management (PS-DBM) and Pharmally Pharmaceuticals Corp uncovered how having a middleman could be legal but highly disadvantageous to the government and its constituents.

P5 million—this was how much the government lost during its initial purchase deal with foreign-owned company Pharmally Pharmaceuticals Corp or just Pharmally.

Pharmally, at the center of the ongoing Senate investigation, was among the firms recommended to and chosen by PS-DBM to supply face masks, test kits, PPEs and other medical supplies for the pandemic.

The little-known company, which was registered at the Securities and Exchange Commission (SEC) on Sept. 4, 2019 by Huang Tzu Yen, a Singaporean, bagged 13 contracts with the government worth a total of P11 billion—all involving supplies for COVID response—despite having a declared paid-up capital of only P625,000. 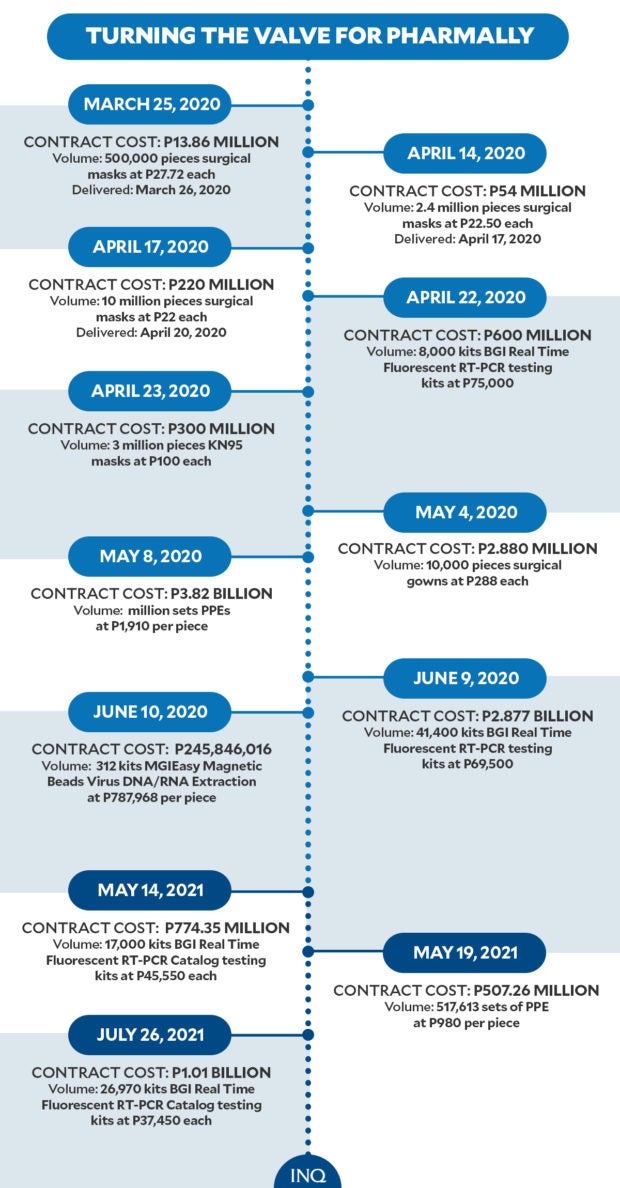 
At a Senate hearing, Linconn Ong, Pharmally director, admitted that the company did not have stocks of PPE and the inventory that the company delivered came from a local supplier—Brother Tiger or TigerPhil Marketing Corp.

At one point during the investigation, Pharmally officials admitted that the company had no money to buy the supplies and had to borrow from Chinese businessman Michael Yang, a close friend of President Rodrigo Duterte in Davao City. 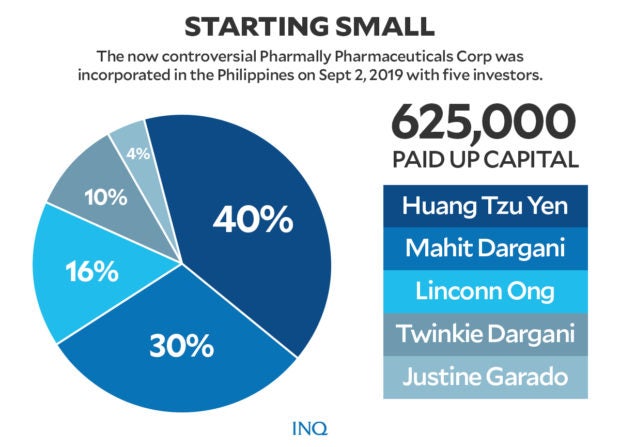 But TigerPhil also served only as a middleman for Pharmally after it was disclosed that TigerPhil bought 500,000 masks from Greentrends Trading International Inc. to be turned over to Pharmally.

Based on figures presented during the previous Senate hearings, both Pharmally and TigerPhil profited from the transactions as a result of the marked up prices of face masks. 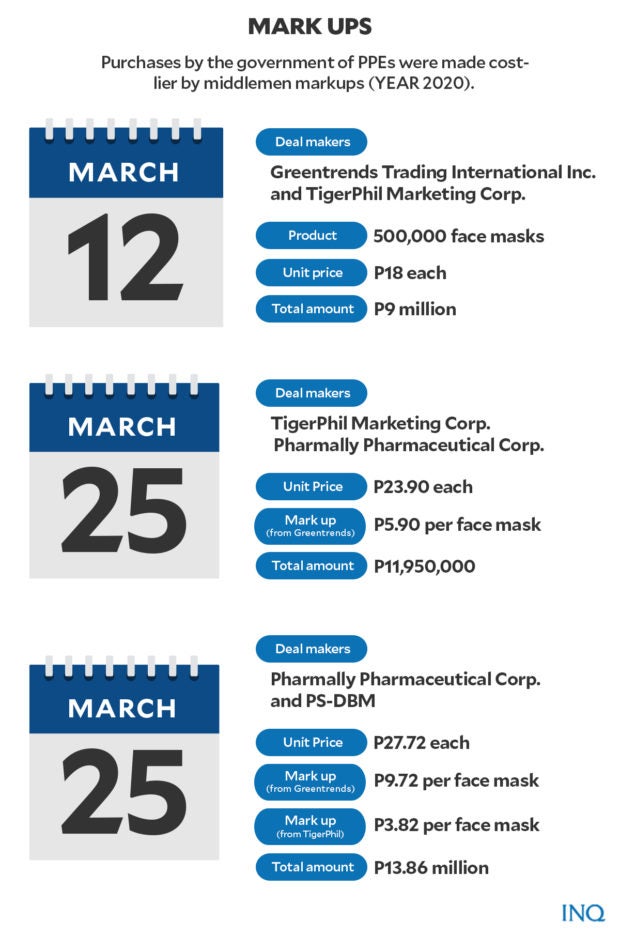 The Senate probe detailed the costly initial transaction between TigerPhil, Pharmally and the PS-DBM:

marking up the price of face masks that were originally sold by Greentrends, TigerPhil earned at least P2,950,000 while Pharmally earned around P1,910,000 in just one transaction.

In its annual report, the Commission on Audit flagged seven companies involved in the P42 billion procurement of supplies for COVID-19 response.


Of the six companies which supplied face masks to DOH through PS-DBM, Pharmally had the highest unit price at P27.72 a piece.

Based on the COA report, here are the unit price set by the five other companies:

Aside from face masks, Pharmally also supplied COVID-19 test kits that cost P1,720 each. Other suppliers sold kits at around P925 each.


Pharmally, whose role was just as a middleman, has earned P393 million in total from the government contracts for the supply of face masks and face shields from April to June 2020, according to Senate Minority Leader Franklin Drilon last month.

Aside from the estimated profits from the multi-billion contracts, Sen. Richard Gordon revealed the brand-new luxury vehicles—worth P52.9 million—registered to the three top executives of Pharmally just after the company bagged the juicy deals from the government.

The price of the expensive vehicles supposedly owned by three Pharmally executives were:


Meanwhile, according to Sen. Panfilo Lacson, Pharmally bagged 26.39 percent of the P42 billion transferred by DOH to PS-DBM, “even with a P625,000 initial capitalization.”

The senator, at a Senate hearing on Sept. 24, also questioned the discrepancy found in TigerPhil’s financial statement last year.

While records showed that TigerPhil netted P21.51 million in sales to Pharmally, the firm declared an income of only P3.479 million for 2020.

In defense, Tigerphil president Albert Sy said the amended annual income tax return his company paid was P1.13 million. Sy also said it would have paid the right taxes even if the Senate did not conduct an investigation.

Former PS-DBM head Christopher Lloyd Lao, in a hearing at the House of Representatives on Sept. 21, said there was a legal basis for PS-DBM to procure the face masks from Pharmally—provisions in the Bayanihan 1 law.

The Bayanihan 1, which was passed to allow the government to reprogram and reallocate funds to COVID-19 response, also provided that certain procurement laws were suspended to expedite the purchase of medical equipment.

“Bayanihan 1 expressly states that procurement should be made judiciously, economically, and expeditiously in the exemptions from the provisions of [Republic Act No.] 9184 and other relevant law,” Lao said.

Lao, who signed most of the contracts for PS-DBM, also explained that Bayanihan 1 allowed the government to purchase and procure “readily available” medical supplies for the pandemic, like face masks and face shields.

When asked by senators whether he exercised due diligence before awarding contracts to Pharmally, Lao said he did but “failed to check on the articles of incorporation” since it was not required by Bayanihan 1.

He also insisted that the law took effect on March 25, which means that the first contract dated March 25 given to Pharmally worth P13.86 million for 500,000 pieces of surgical masks that was requested by PS-DBM was covered by the law. 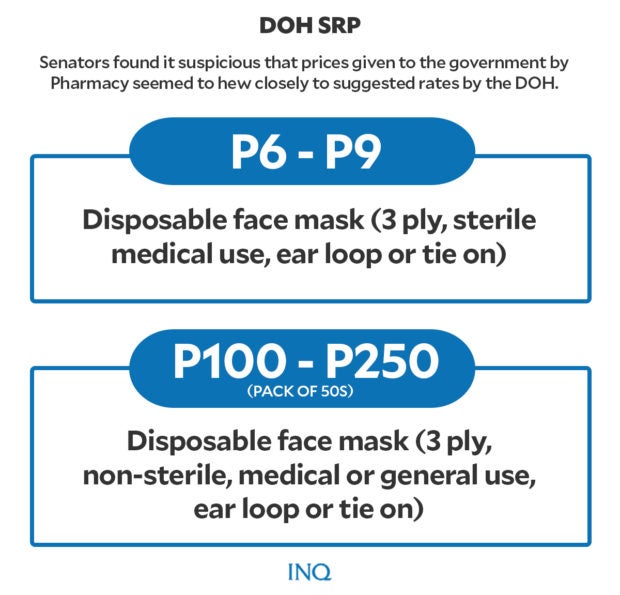 However, Sen. Francis Pangilinan said the law was enforced on April 6, not March 25.

“No.  March 25?  Therefore it was already compliant and the transaction falls under Bayanihan 1? We have to look into this because the effectivity of Bayanihan 1 was after posting, and it was April 6,” Pangilinan said.

“The Bayanihan 1 and the rules took effect April 6,” he said.

Supplies delivered by Pharmally on March 25 were not covered by Bayanihan 1, Pangilinan said. Lao had claimed that the law was published in the Official Gazette on March 25 after it was signed by President Rodrigo Duterte on March 24.

Senators tell Lao: Bayanihan 1 not yet in effect when you bought masks from Pharmally


Still, Duterte sided with Lao and said that Bayanihan 1 was already in effect on March 25.

But according to procurement expert and Lawyer Ernie Salao, “technically there is a violation” if the first contract between Pharmally and the government took place before the date of effectivity of Bayanihan 1’s implementing rules and regulations (IRR).

While Lao and Duterte use Bayanihan 1 as legal basis for PS-DBM’s controversial procurement, the transactions and contracts awarded to Pharmally could still be questionable.

Based on an analysis by the nongovernment watchdog Citizens’ Budget Tracker (CBT), Pharmally “does not appear to be financially capable to support P7.9 billion contracts that were awarded from a very short time frame.”

A review of the Statement of Cash Flows and the Statement of Financial Position also showed that Pharmally’s P5,994,500 total assets before bagging the contracts were insufficient to warrant the awarding of P7.9B worth of contracts from April to June 2020.

“It’s very curious that a company that only has 599 thousand in its bank account is being made to fulfill contracts that are worth billions,” said Jahleel-An Burao.

According to Lawyer Zoilo Andin Jr., when the government enters into a contract, it should make sure that the company is legally, technically, and financially capable.

“It looks like the PS-DBM lacked diligence in checking the firm’s background. It’s a basic requirement,” he said.

Lawful or not, the overpriced transactions between the DOH, PS-DBM, and Pharmally have pushed hundreds of health care workers in the country to issue a manifesto, which called out the government’s “incompetence, insensitivity and corruption” despite the ongoing pandemic.

The manifesto — issued by past leaders of the Philippine College of Physicians (PCP) and other medical societies, members of the medical profession — likewise demanded an end to the “long-standing passivity” among members of the health profession.

“It has left free and unrestrained politicians and people with absolutely no competence in running the country, much less this catastrophic health debacle, to abuse power with impunity, misuse and steal taxpayers’ money and insult their intelligence, feed on the Filipinos’ desperation and helplessness at the time when their plea for true leadership is loudest but has remained unheeded,” the petition read.

“Unmitigated and shameless greed is being flaunted to our faces!”

Doctors come out of their shells, demand end to corruption, incompetence in COVID handling

Corruption scandals amid pandemic: When doctors shout for change


The overpriced purchase was also carried out while many overworked and exhausted nurses and health care workers still wait for the benefits that are due them.