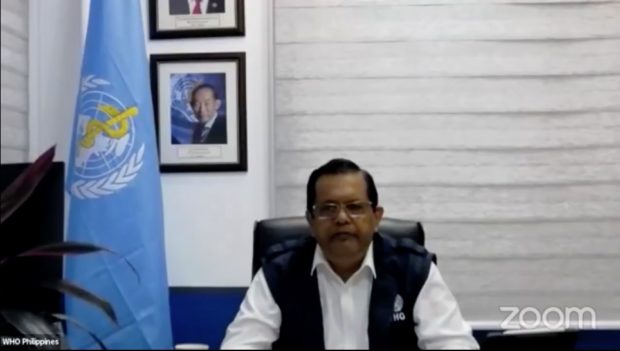 FILE PHOTO WHO representative to the Philippines Dr. Rabindra Abeyasinghe

MANILA, Philippines — The World Health Organization (WHO) on Monday clarified its position that unvaccinated senior citizens should still be prioritized in the government’s COVID-19 vaccination program, amid their push for third doses for immunocompromised elders.

According to WHO representative to the Philippines Dr. Rabindra Abeyasinghe, they are suggesting that the government give third vaccine doses to elders who got the Sinovac or Sinopharm shots, starting with the most immunocompromised individuals aged 80 and above, then 70 and above, and then 60 and above.

However, the senior citizens who have not obtained even one dose of the COVID-19 vaccine, which accounts for around three million in the country, should still take priority in the vaccination, Abeyasinghe said.

“Our position is now that third dose may be provided to immunocompromised people, if they have finished their two doses, then we will also recommend the third dose for elders above 60 years who received either Sinovac or Sinopharm vaccines,” he said during the Laging Handa public briefing on Monday.

“So this is what our position is now so that we maximize the benefit of the third dose in those groups who will be receiving the third dose, but again the priority is to provide the first and second dose to those who have not been able to get a single shot, which is about three million people still in the Philippines, among the elderly,” he added.

Last October 15, the Department of Health announced that immunocompromised seniors would get the third vaccine shot to ensure that they are protected from the COVID-19 pandemic.

Abeyasinghe said that this is because some of the

are not really “capable of developing and sustaining the level of immunity that will protect them from severe disease and death”.

Despite the suggestion to provide the third dose, Abeyasinghe maintained that this is not a booster shot because it is not meant to increase an already vaccinated person’s immunity from the disease.

Rather, the third dose is meant to ensure that the elderly are properly protected.

“I’d like to clarify that what we are recommending is a third dose and not a booster dose, there is a difference in the scientific terminology, and we are saying a third dose for immunocompromised or elderly people who received Sinovac and Sinopharm,” Abeyasinghe explained.

Currently, the government is already vaccinating the general population, or those aged 18 and above, and on a limited scale for now, immunocompromised minors aged 12 to 17.

However, there were concerns from various groups about a possible

dip in the efficacy of vaccines

over time, especially with the emergence of other

— despite Abeyasinghe naming Sinovac and Sinopharm before and earlier — that needs a third dose.