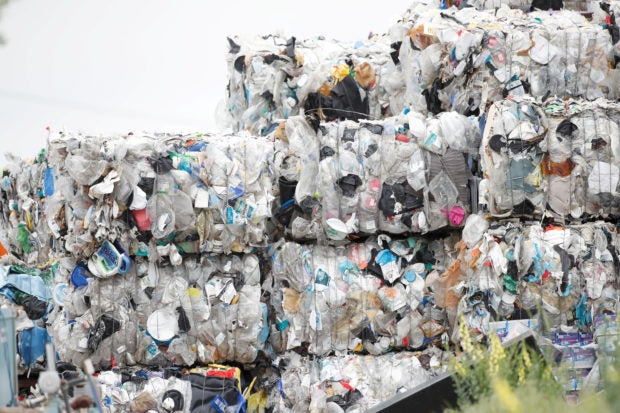 Bales of hard-to-recycle plastic waste are seen piled up at Renewlogy Technologies in Salt Lake City, Utah, U.S., on May 17, 2021. (REUTERS)

WASHINGTON  – The carbon-intensive production of plastics is on pace to emit more greenhouse gases than coal-fired power plants within this decade, undercutting global efforts to tackle climate change, a report released on Thursday said.

The report by Bennington College and Beyond Plastics projected that the plastic industry releases at least 232 million tons of greenhouse gases each year throughout its lifecycle from the drilling for oil and gas to fuel its facilities to incineration of plastic waste. That is the equivalent of 116 coal-fired power plants.

“The scale of the plastics industry’s greenhouse gas emissions is staggering, but it’s equally concerning that few people in government or in the business community are even talking about it,” said Judith Enck, a former Environmental Protection Agency regional administrator and president of Beyond Plastics.

Also, the report found that petrochemical facilities tend to be clustered in just 18 largely low-income and minority communities, where 90% of the pollution occurs.

With at least a dozen more plastic production plants under construction and 15 more planned, resulting emissions would undercut any gains made by phasing out coal power and shifting toward more renewable energy, Enck said.

The report also said authorities probably have undercounted emissions and air pollution related to different stages of the production of plastics and export of plastic waste. That is because U.S. regulations do not require the plastic industry to report them and no federal agency tracks them, said report author Jim Vallette of research group Material Research.

Plastics Industry Association spokesman George O’Connor said in a statement that the report “cherry picks data” and pointed to other studies that found that plastic actually results in lower carbon emissions due to its lighter weight and durability compared to alternatives like glass and paper.

Enck said the report is based on data from federal agencies including the Environmental Protection Agency and Commerce Department, which are based on plastic industry reporting. She conceded that plastic was lightweight and durable but added that the industry’s calculations neglect other factors that increase emissions.