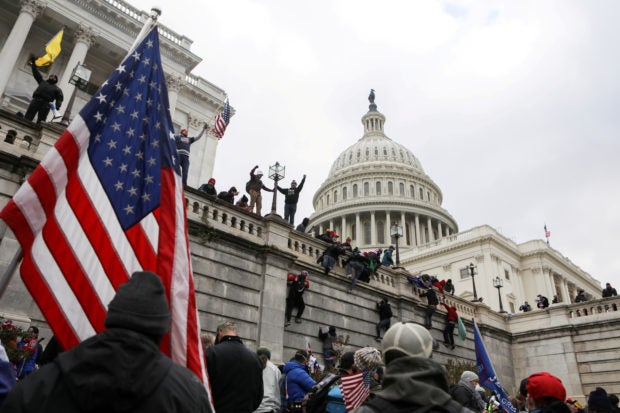 FILE PHOTO: Supporters of U.S. President Donald Trump climb on walls at the U.S. Capitol during a protest against the certification of the 2020 U.S. presidential election results by the U.S. Congress, in Washington, U.S., January 6, 2021. REUTERS/Jim Urquhart

Federal prosecutors on Friday accused a U.S. Capitol Police officer of obstructing a probe into the January 6 attack on the government building by urging a participant to destroy Facebook posts showing him inside, warning that he could be prosecuted.

In a six-page indictment, prosecutors said that Michael Riley, a Capitol Police officer for more than 25 years, had become a Facebook friend with the suspect identified as “Person 1” on January 1 and then direct messaged the individual on January 7.

“Hey (Person 1), I’m a capitol police officer who agrees with your political stance,” Riley said in the message. “Take down the part about being in the building they are currently investigating and everyone who was in the building is going to be charged.”

Hundreds of supporters of former Republican President Donald Trump stormed the Capitol building on Jan. 6 in a failed attempt to overturn his election defeat. Four people died in the violence, more than 100 police officers were injured and four officers in the crowd that day later died of suicide.

Prosecutors say Riley exchanged “dozens more” direct messages with the riot suspect on Jan. 7, including one in which he wrote “I’m glad you got out of there unscathed. We had over 50 officers hurt, some pretty bad.”

Each of the two obstruction charges Riley faces carries a maximum sentence of 20 years in prison, though judges often impose sentences below the maximum.

At a brief court hearing on Friday, federal Magistrate Judge G. Michael Harvey agreed to Riley’s release on bail, ordering him not to leave the continental United States without court approval and to report weekly by phone to pre-trial services.

Riley, who did not immediately enter a plea, also must not possess guns or other weapons, the judge said.

A lawyer for Riley did not immediately respond to a request for comment.