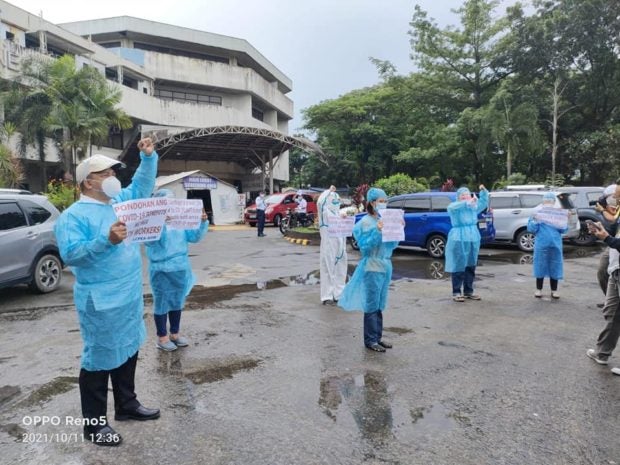 Members of AHW hold a protest on Monday noon, October 11, 2021, at the Lung Center of the Philippines grounds in Quezon City to condemn the alleged P1-billion reduction in the 2022 budget of government hospitals. Photo from AHW’s Facebook page

According to AHW national president Robert Mendoza, the slash in the funds of Philippine Children’s Medical Center (PCMC), Lung Center of the Philippines (LCP), Philippine Heart Center (PHC), and National Kidney and Transplant Institute (NKTI) would affect their Maintenance and Other Operating Expenses (MOOE) next year.

“We, health workers are resentful and enraged with the Duterte government because, in the midst of COVID-19 pandemic and health crisis, it has the gall to reduce the budget for the MOOE of four GOCC hospitals by P1 billion,” Mendoza said. GOCC refers to Government-Owned and Controlled Corporations.

“This government is inhumane and has no compassion for the health and lives of the people, especially the vagrants and destitute who cannot afford to pay heavily for their hospitalization,” he added.

The group said PCMC would suffer the biggest MOOE budget cut with P891 million, followed by LCP with P100 million, then PHC with P28 million, and NKTI with P8 million fund reduction.

The AHW asserted that decreasing the MOOE budget of the four government hospitals in 2022 would result in inadequate medicines and medical supplies, insufficient payment for salaries of contractual health workers, and non-funding of the Collective Negotiation Agreement (CNA) incentives for unionized health workers.

Moreover, the AHW said MOOE budget cutback would mean patients paying higher fees for laboratory procedures and room rates as government hospitals usually earn from these. Thus, the group warned, many indigent patients might not be accommodated and would be deprived of needed medical services

– which could result in increased


National Planetarium closed for now as building set for decommissioning