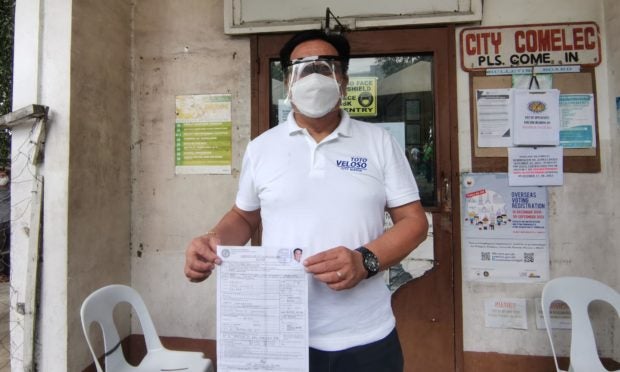 TAGBILARAN CITY––Vice Mayor Jose Antonio Veloso filed Friday his certificate of candidacy (COC) for mayor of this city in next year’s elections.

“This is my last term as vice mayor and I have been supporting the programs and activities of the city. What is best for the city we will continue. We will improve and expand the programs especially for the youth, senior citizens, education, and health care,” he said.

Veloso, who is running under Aksyon Demokratiko, hoped to improve the lives of Tagbilaran City residents.

“Tagbilaran is a city. It is not a kingdom,” he said.

Veloso said he planned to establish a city hospital or healthcare facility to cater to the needs of 104,000 residents.

“It was a long-delayed project that we didn’t realize,” he said.

Veloso was elected councilor in 2001, and in 2004, was reelected, and even topped the councilor race. He ran and was elected vice mayor in 2007 and eventually became the national president of the Vice Mayor League of the Philippines.

Veloso is running against Jane Yap and Councilor Vicente Polinar, who have filed their candidacies.

“This is a friendly fight. They are worthy opponents,” he said.