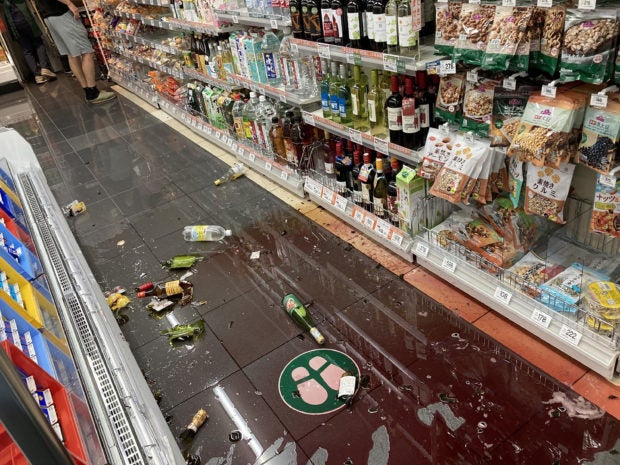 Items lay on the ground at a convenience store in Tokyo on October 7, 2021, after a 6.1-magnitude earthquake shook the Japanese capital and surrounding areas. (Photo by STR / JIJI PRESS / AFP) / Japan OUT

More than 20 people have been reported injured after

6.1-magnitude earthquake jolted the Japanese capital Tokyo and surrounding areas on Thursday evening, but the Japan Meteorological Agency (JMA) said there was no tsunami risk.

The quake sent buildings swaying, stranded commuters, knocked products off store shelves, and triggered emergency warnings blaring from the phones of local residents, intended to give them time to take shelter.

Initial information from the JMA put the epicenter of the quake in Chiba prefecture, east of Tokyo, and said it struck at 10:41 p.m. (1341 GMT) with a depth of 80 kilometers. No tsunami alert was issued.

The US Geological Survey (USGS) put the quake’s strength at magnitude 5.9 with a depth of 61 kilometers.

It was one of the strongest temblors to rock Tokyo since the massive 9.0 earthquake and tsunami disaster in 2011 that killed thousands.

Some bullet and local train services were halted as a precaution after the quake. People in Tokyo were seen waiting early Friday in the Shinagawa station during the suspension of service, while others lined up at taxi stands seeking alternate transportation.

Police and fire authorities said more than 20 people were injured, including a passenger who hit her head when a train came to a sudden halt, according to the Kyodo news agency.

Checks were conducted at regional nuclear plants, and Kyodo said Chief Cabinet Secretary Hirokazu Matsuno confirmed there were no abnormalities reported at the facilities.

The quake was relatively strong compared to recent quakes in Tokyo, which like much of Japan regularly experiences seismic activity.

Newly elected Prime Minister Fumio Kishida, who took office just three days before the quake, in a tweet urged residents to “please take action to save lives while checking the latest information.”

Kishida’s government reportedly has set up a crisis management center to assess the damage and provide support where needed. 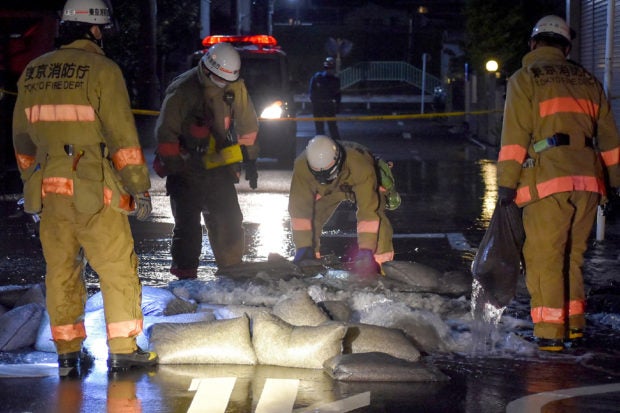 Members of the Tokyo Fire Department try to fix a broken water pipe in Tokyo on October 7, 2021, after a 6.1-magnitude earthquake shook the Japanese capital and surrounding areas. (Photo by STR / JIJI PRESS / AFP) / Japan OUT

Japan sits on the Pacific “Ring of Fire,” an arc of intense seismic activity that stretches through Southeast Asia and across the Pacific basin.

Early on Friday, a 5.6-magnitude quake rattled northwestern Myanmar, with the USGS registering the depth at 114 kilometers. There were no immediate reports of casualties or damage.

The country is regularly hit by quakes and has strict construction regulations intended to ensure buildings can withstand strong tremors.

But it remains haunted by the memory of the March 11, 2011, undersea quake that triggered a deadly tsunami and unleashed the Fukushima nuclear accident.


WHO endorses first-ever vaccine against malaria