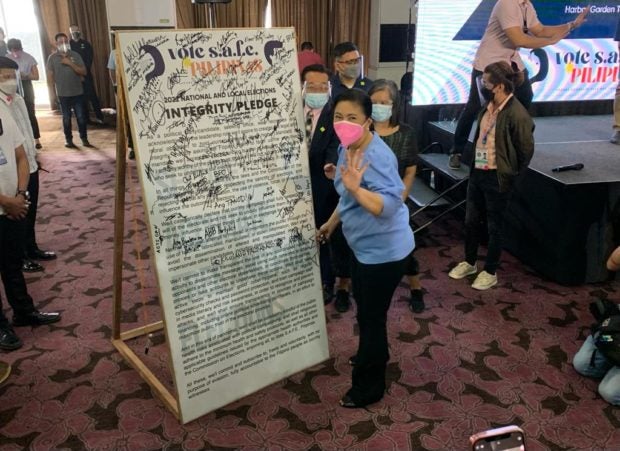 MANILA, Philippines — With her office providing innovative and practical programs to counter the COVID-19 pandemic, Vice President Leni Robredo earned praise from various sectors and even from some administration allies for being proactive despite her limited role in the government.

But Robredo said that the programs she initiated — from drive-thru vaccinations with Vaccine Express, telemedicine channels at Bayanihan E-Konsulta, mobile testing facility Swab Cab, to the online public market shopping method Community Mart — could be enhanced and increased if she is elected president.

During her announcement of her presidential bid on Thursday, Robredo said that her programs could help more people if the government — her government — would not impede access to communities and would focus on merely helping Filipinos.

‘Buong-buo ang loob ko’: Robredo to run for president in 2022

Before the start of the COVID-19 pandemic, Robredo’s office focused on providing livelihood opportunities for people living in impoverished situations by tapping private sector partners to help them as they lack funding.

Despite the small and often reduced funds, the Office of the Vice President (OVP) was praised for providing people a chance to improve their lives.

Aside from that, OVP also provided hot meals for health workers on the frontline of the fight against the pandemic, while responding to the needs of people hit by successive typhoons last October to November 2020.

2020: A year OVP kept itself busy despite lack of funds, brickbats from Malacañang

In 2021, amid the threat of the more infectious Alpha and Delta variants, OVP changed its strategy by setting up a telemedicine station where people suspected of being infected can contact doctors through the Messenger app, so that they can be subjected to triage.

In doing so, OVP minimized consultations which eased hospital capacity while helping patients by connecting them to concerned government agencies.

OVP’s Vaccine Express aims to immunize 4,000 vs COVID in Pasig

During the Senate’s recent hearing on the budget of the OVP, senators, even those in the majority bloc, said that they want to increase the allocations to Robredo’s office, given all of her activities that benefit a lot of people.

But even with the support and praises, Robredo acknowledged that the 2022 elections would be a difficult battle for her.