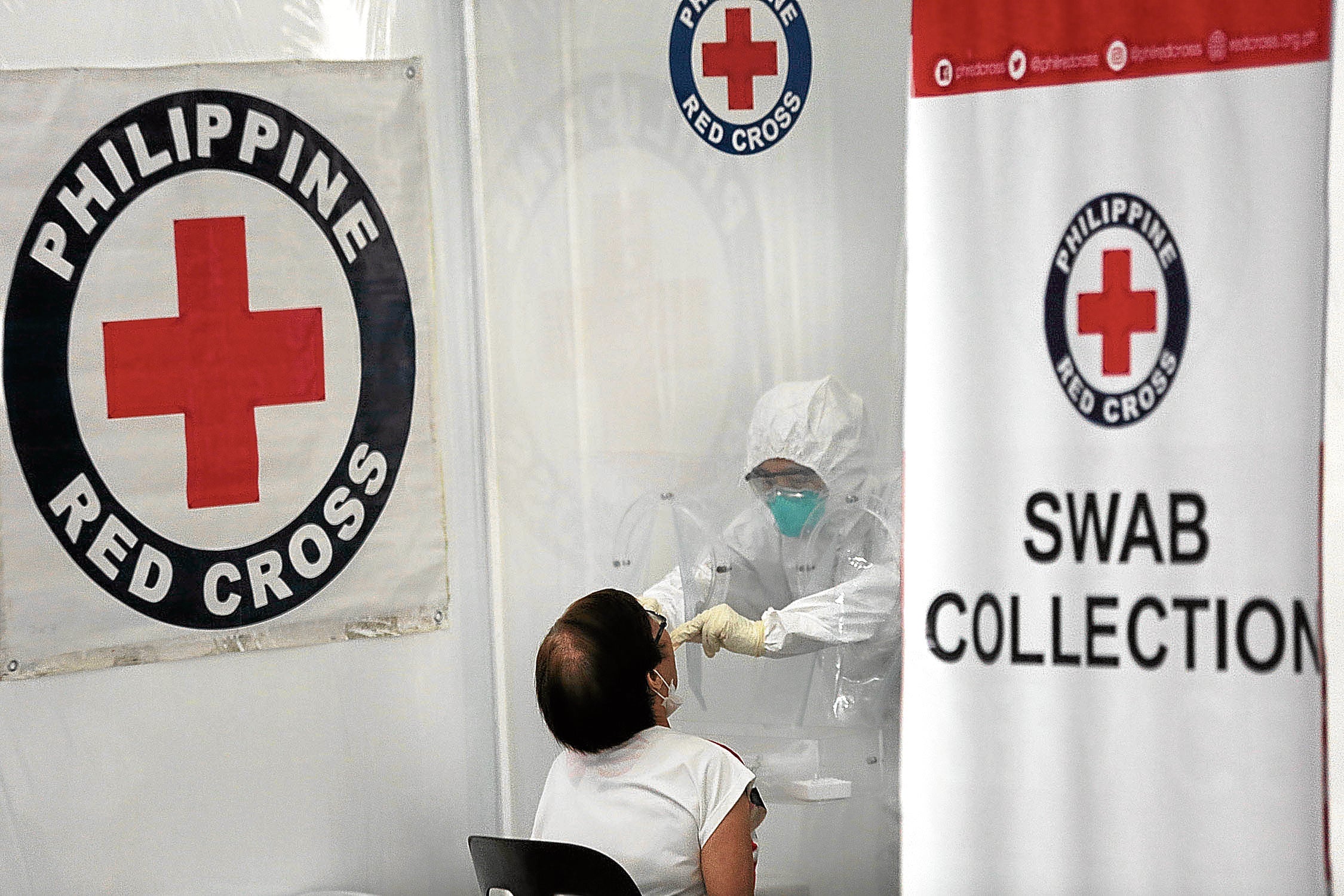 FILE PHOTO: A Red Cross worker takes a swab sample of a patient at the Philippine Red Cross laboratory in Mandaluyong City in April 2020. INQUIRER

MANILA, Philippines — Senator Richard Gordon on Tuesday hit administration officials for allegedly allowing themselves to be used by President Rodrigo Duterte in destroying the Philippine Red Cross (PRC) despite all the help the humanitarian organization extended the government since the pandemic started last year.

During the hearing of the Senate blue ribbon committee which Gordon chairs, the senator asked Health Secretary Francisco Duque III if PRC was of any help at all in the government’s COVID-19 response, enumerating certain instances when the Inter-Agency Task Force for the Management of Emerging Infectious Diseases (IATF) officials were all praises to it.


Pharmally funding came from friends, not me, Michael Yang insists


Robredo, Moreno among 1Sambayan’s top bets to lead opposition in 2022

(Why is that when you needed the Red Cross, you were all there, a bunch of you lined up at Red Cross and said that ‘this is a game changer’.  Hasn’t the Red Cross been of help to the government?)

(You sent many letters praising the Red Cross. But now, why are you allowing yourselves to be used by our President?)

Gordon then mentioned that PRC has been testing a lot of people for COVID-19 even if its original plan was to just “test whatever we can test.”

“Isn’t that a fact that you came to the Red Cross to ask us to test because we were not going to test the whole country, we were just going to test whatever we can test?  Hindi po ba totoo na ngayon, ang Red Cross ang may pinakamaraming tine-test na umabot na ng halos 4.4 million?  Tama po ba ‘yon?” he asked again.

(Isn’t it true that now, the Philippine Red Cross has the highest number of COVID-19 tests being done, reaching almost 4.4 million?  Isn’t that right?)

As a reply, Duque recognized that PRC has been testing the most number of possible COVID-19 patients in the private sector, second to the government.

(After our national government, the Philippine Red Cross has the highest testing output, your Honor, Mr. Chairman.)

Gordon’s questioning came after Duterte, in his “Talk to the People” on Monday, hit the PRC and directed the Department of Health (DOH) to probe the alleged “false positive” results of COVID-19 tests supposedly done by the humanitarian organization. Duterte even asked Gordon if the senator diverted “pork barrel” funds to PRC.

The word war between Gordon and Duterte, as well as the President’s subsequent tirades against the PRC, was an offshoot of the Senate blue ribbon committee investigation that stemmed from a Commission on Audit (COA) report marking deficiencies in the P67.32 billion COVID-19 fund of the DOH in 2020.

Part of the deficiencies involved the P42 billion transferred by DOH to the Procurement Service-Department of Budget and Management (PS-DBM) in which a big portion — P8.7 billion — was allocated to a relatively small company, Pharmally Pharmaceutical Corp., which only had a paid-up capital of P625,000.

In a similar investigation at the House of Representatives on Monday, Sagip party-list Rep. Rodante Marcoleta claimed that his office has received reports that 44 of 49 health workers in Subic who were allegedly tested by the PRC got false-positive results.

Marcoleta said the health workers complained that after a retest, only four of the 44 were actually infected with COVID-19.