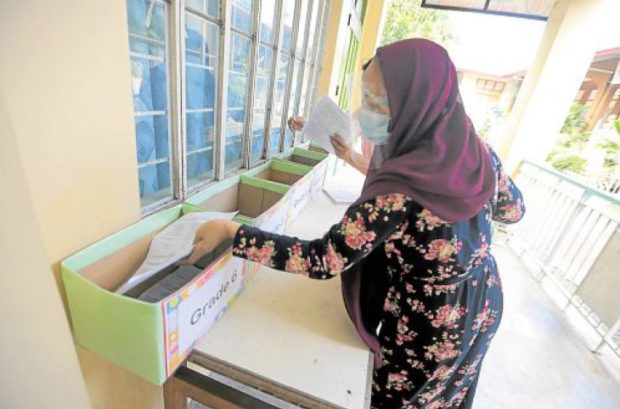 DROP BOX NOT FOR DROPOUTS A mother submits an enrollment form for her child at Juan Sumulong Elementary School in Antipolo City on Wednesday. A new school year starts in the public education system on Sept. 13, 2021, but distance learning will likely remain the norm as the  pandemic rages on and with vaccination numbers in the country still way below target. INQUIRER file photo / GRIG C.MONTEGRANDE

MANILA, Philippines — The enrollment for School Year 2021-2022 has breached 12 million registrants, the Department of Education (DepEd) reported on Tuesday.

The Cordillera Administrative Region, on the other hand, has the lowest number of enrollees at 275,768 followed by the Bangsamoro Autonomous Region in Muslim Mindanao at 350,435 and Mimaropa (Mindoro, Marinduque, Romblon, Palawan) at 388,413, according to the same DepEd’s  data.

Meanwhile, 87,731 individuals were listed under the alternative learning system for the upcoming school year. This is 14.64 percent of last school year’s 599,365 registrants.

Last day of student registration is on September 13, the opening date of classes.

Blended learning, wherein students get lessons through online, radio or television, or modules, will still be implemented to avoid contraction of COVID-19.