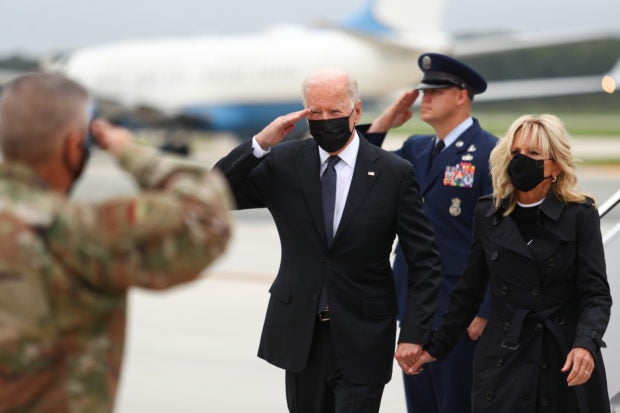 shut his eyes and tilted his head back as the flag-draped cases carrying the remains of 11 American service members killed in a suicide bomb attack in Afghanistan emerged on Sunday from a military plane at a base in Delaware.

Biden, his wife, Jill, Defense Secretary Lloyd Austin and senior military officials stood somberly as U.S. troops carried the cases down the ramp of an Air Force C-17 aircraft at Dover Air Force Base. Crying could be heard and a woman collapsed as the remains were loaded into vans for transport to a facility where they will undergo identification and autopsies.

The 11 service members were among 13 U.S. troops killed in an Islamic State suicide attack on Thursday outside Kabul’s airport, where the United States has been staging a massive airlift of Americans and Afghans during the past two weeks. Scores of Afghans were also killed in the attack.

None of the fallen service members was over the age of 31, and five were just 20, as old as the war itself.

Earlier on Sunday, Biden and his wife met with grieving family members of some of the fallen American service members.

The remains of two other U.S. service members killed in the attack are being brought home privately at the request of their families.

Biden, a Democrat, has been criticized by Republicans, who have accused his administration of bungling the Aug. 31 withdrawal of U.S. forces from Afghanistan after a two-decade war in the South Asian nation.

His administration is focused on safeguarding the remaining U.S. troops in Kabul and getting the rest of the Americans as well as many vulnerable Afghans evacuated from the capital. More than 114,000 people have been airlifted in the past two weeks as part of the U.S. effort.

“We are in a period of serious danger given what we are seeing in the intelligence,” Biden’s national security advisor, Jake Sullivan, told CNN’s “State of the Union” program in an interview broadcast on Sunday, before the latest strike was reported.

“We are taking every possible measure at the direction of the president to ensure that our forces are protected on the ground even as they complete their mission of bringing in the remaining American citizens and Afghan allies.”

Thursday’s attack, which was claimed by ISIS-K, the Afghan affiliate of Islamic State, was the most lethal incident for U.S. service members in Afghanistan in a decade.

It took place just outside the gates of the airport, where thousands of people have gathered to try to get a flight out the country since the Taliban returned to power on Aug. 15.

The Islamist militants’ rapid advance across Afghanistan amid the withdrawal of American and allied troops combined with the chaotic scenes at the airport have presented Biden with his biggest foreign policy challenge as president.

Biden has vowed to punish those responsible for the airport bombing. The U.S. military said on Saturday it had killed two ISIS-K militants in a drone attack in eastern Afghanistan.

Sullivan said the two “are individuals involved in the facilitation and planning and production of explosive devices and they are part of the larger network of ISIS-K.”

The United States has evacuated nearly 5,500 American citizens from Afghanistan since Aug. 14, including 50 in the last day, and was still working to get about 250 American citizens in the country onto evacuation flights, a State Department spokesman said.

NATO, the European Union and 97 other countries signed on to a joint statement with the United States on Sunday saying they will continue to issue travel documents to at-risk Afghans and expect the Taliban to stick to its commitment to allow those people to leave.

The United States was unlikely to have any diplomats in the country after the Tuesday deadline for the withdrawal of NATO forces, Secretary of State Antony Blinken said in an interview on NBC’s “Meet the Press” program.

“In terms of having an on-the-ground diplomatic presence on September 1st, that’s not likely to happen,” Blinken said.

Blinken later spoke with Chinese Foreign Minister Wang Yi, who urged Washington to help the new regime in Kabul that is likely to be led by the Taliban, including on countering terrorism, according to a Chinese foreign ministry statement.

Senator Ben Sasse, a Republican member of the Senate Intelligence Committee, said the administration had failed to plan for a Taliban takeover, and criticized Blinken for giving an overly positive view of the evacuation effort.

“Their plan has basically been happy talk. People have died and people are going to die because President Biden decided to rely on happy talk instead of reality,” Sasse told ABC’s “This Week.”

Other members of Congress have vowed to probe what went awry in Afghanistan. Senate Foreign Relations Committee Chairman Bob Menendez, a Democrat, said earlier this month his panel will hold a hearing on U.S. policy toward Afghanistan “including the Trump administration’s flawed negotiations with (the) Taliban, and the Biden administration’s flawed execution of the U.S. withdrawal.”