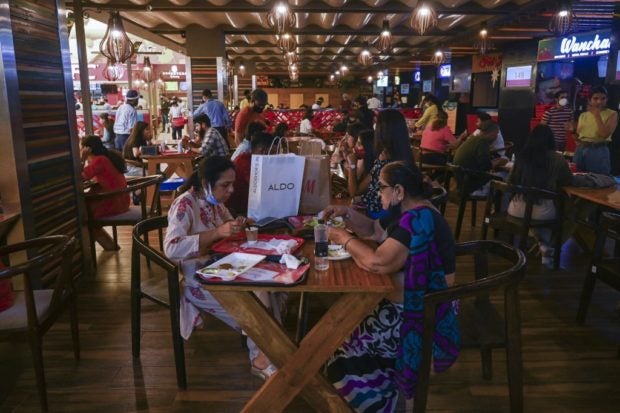 People eat a meal at a food court in Select City Mall after authorities eased a lockdown imposed as a preventive measure against the Covid-19 coronavirus, in New Delhi on June 19, 2021. (AFP)

MUMBAI — Every dish tastes better with a dash of soy sauce, even dessert: That’s the ambitious pitch of Japanese food giant Kikkoman, hoping to persuade Indians to use it in curries, sweets, and everything in between.

Convincing 1.3 billion people to add a staple of East Asian cuisine to their butter chicken and samosas is no cakewalk but it will likely be easier than the brand’s 1960s push into the United States.

“When we entered the US, people thought we were selling bug juice because of its dark color,” Harry Hakuei Kosato, Kikkoman’s India representative, told Agence France-Presse (AFP).

Today the brand’s funnel-shaped dispenser is a ubiquitous presence in US households, accounting for half of the company’s $4.4 billion revenues, and Kikkoman now hopes to replicate that success in India.

Sales were boosted by the West’s growing craze for Japanese cuisine since the 1980s, but the company is taking a different approach to India, which is home to a significant vegetarian population.

“It is not about getting everyone to eat sushi. We want our soy sauce to become the ketchup of India,” Kosato said.

He hopes that the move to market the sauce as an endlessly adaptable condiment will strike a chord in a country where culinary innovation is part of street food culture.

For instance, Mumbai’s grilled Bombay Sandwich — a hawker staple — is a buttered British-style toastie, but with a filling that includes boiled potato, onion, tomato, beetroot, and coriander chutney, topped with a sprinkling of “sev,” a crunchy deep-fried Indian snack.

So it is perhaps unsurprising that some Indian chefs began using soy sauce in their dishes long before Kikkoman launched in the country earlier this year.