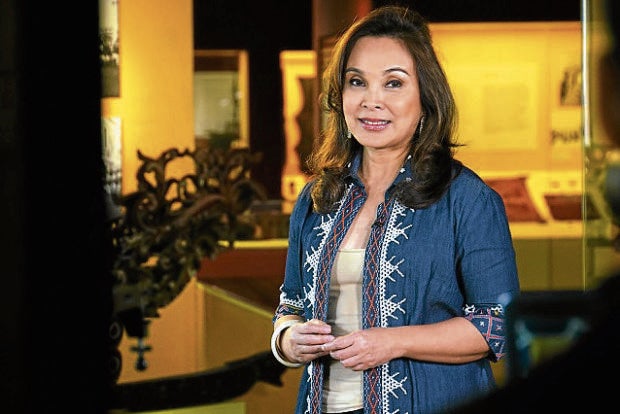 We have materials to last us for 10 to 20 years,” declared House deputy speaker Loren Legarda as she launched the 11th season of the award-winning documentary series “Dayaw” that began airing on Aug. 26.“In the language of the newsroom, naka-bangko na kami ng istorya,” said Legarda, who is the main host of the show currently airing on ANC (ABS-CBN News Channel).

“We’ve done complete staff work. The people behind this show are very passionate and efficient because they have been doing this for a while now. We’ve managed and arranged everything well. It also helped that I’m in government and that this program is also a government production,” explained Legarda when asked to share the difficulties that her team had to hurdle while taping for the show amidst the pandemic.

“Dayaw” is a coproduction of the National Commission for Culture and the Arts and ABS-CBN. Its mission is to promote Filipino indigenous culture and heritage.

“Mounting a show is always challenging, but because this is a passion project, all our troubles are overshadowed by our happiness in producing this. Yes, it’s difficult to go out, our movement is very limited. We currently have a surge in COVID-19 cases, but because we’re always prepared and forward-looking, we’re proud to say that we have enough materials for airing up to next year,” Legarda pointed out.

She further said: “I will just have to comply with the Comelec (Commission on Elections) ruling that a candidate may not appear on TV starting in February. We have to stop when I file my candidacy. That’s a legal issue, and I will have to check with my lawyers. The only challenge I am seeing here is the lifespan of our culture bearers—most of them are already old. If they get sick, then we will not be able to document them. But we’re so lucky that we were able to document most of them while they’re still well. In fact, we have interviewed Whang Od years ago, long before everybody.”

Whang Od is a world-renowned tattoo artist from Buscalan in Kalinga province.

The 11th season of “Dayaw” carries the theme “Kakaibang Sigla,” and features traditional Filipino children’s games such as patintero, sipa and luksong tinik in the first episode. It is followed by a two-part special on the Punnuk, a show of physical strength that ends the Ifugao’s harvest season. “Dayaw” will also focus on Filipino martial arts such as arnis, silat and eskrima in its next episodes.

“It’s different from all the other episodes, which focused on song and dance, physical instruments and weaving,” Legarda told Inquirer Entertainment. “This features sports. How I wish I can take you on a road trip to Ifugao to experience this. I’m also building a textile gallery there.”

The season will wrap up on Sept. 3 with “Sayawang Pinoy,” an episode highlighting “how grace and fluidity of movements of Filipinos express our energy, discipline and joy as a people,” Legarda added.

Despite the pandemic, “Dayaw” has been able to launch new seasons, with Season 12 already in the works. Titled “Kaka-ibang Sigla: Our Vital Energy Part 2,” it will explore love, courtship, marriage and the cycles of life featuring the Gaddang, Tboli and Sama Dilaut.

“We are fortunate to have shot a treasure trove of materials before the pandemic began. This has enabled us to go on with our mission of telling the stories of our indigenous peoples so that future generations may still be able to appreciate and continue their legacy,” said ANC COO Nadia Trinidad.

Legarda said it is also a goal for “Dayaw” to be seen by as many viewers as possible. “Since we are in a virtual world, anyone can share it. It is airing on ANC, it is uploaded on YouTube, and being shared with the DTI (Department of Trade and Industry). We have to be hard sell in promoting ‘Dayaw’ so that each and every Filipino organization in all corners of the world will have a copy. ‘Dayaw’ is not just for Filipinos but also for the global citizens of the world,” she added.“Dayaw” Season 11 airs every Thursday, 6 p.m., on ANC on cable and the ANC Facebook page. INQ