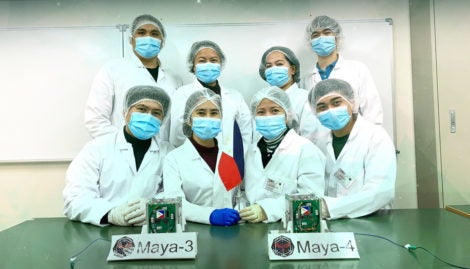 THEY WORKED FROM HOME, TOO The eight-member team of scholars who developed Maya-3 and Maya-4 (on table), low-orbit satellites being launched into space via a SpaceX rocket on Sunday. —PHOTO FROMSTAMINA4SPACE

MANILA, Philippines — Two low-orbit satellites — the first to be developed entirely in a Philippine laboratory by Filipino engineers — are heading out to space today.

Maya-3 and Maya-4 will be hitching a ride on a SpaceX Falcon 9 rocket taking off from Kennedy Space Station in Florida at 3:14 p.m. on Sunday (Manila time). The launch was originally scheduled for Saturday but was reset due to Hurricane “Ida.”

They will be part of the rocket’s cargo of supplies for the International Space Station, from which the satellites will be released into orbit.

A livestream of the launch can be viewed online at the National Space Administration’s YouTube page and on its website at nasa.gov/nasalive.

Maya-3 and Maya-4 are cubesats—literally shaped like cubes measuring 10 centimeters by 10 cm by 11.5 cm—designed and developed by the first batch of scholars who studied under STeP-UP, a partnership between the University of the Philippines (UP) and the Kyushu Institute of Technology in Japan. STeP-UP is part of a larger initiative, the STAMINA4SPACE Program, funded by the Department of Science and Technology.

They are also classified as nanosatellites based on their weight: the two Mayas are only 1.15 kilograms each.

The eight STeP-UP scholars behind Maya-3 and Maya-4 are currently finishing their master of science degrees in electrical engineering (nanosatellite engineering track) at the Electrical and Electronics Engineering Institute (EEEI) at UP Diliman.

Their professors were part of earlier Philippine satellite-building projects.

Maya-3 and Maya-4 were almost identical, the only difference being the near-infrared camera mounted on the latter.

Like the first Maya, which was launched in June 2018, the two latest iterations are equipped with an RGB camera, automatic packet reporting system message digipeater, global positioning system chip and an anisotropic magnetoresistance sensor.

The Maya line of satellites are named after a native bird also known as chestnut munia (Lonchura atricapilla).

Unlike their earlier, bigger sisters Diwata-1 and Diwata-2, which feature high-precision cameras, they are mainly meant for “technology demonstration,” or for applying what the scholars’ have learned within the course period.

“For one thing, they are very small. Unlike microsatellites like Diwata … [they] are much cheaper to build,” said Paul Jason Co, the engineer who heads STeP-UP. Ensuring continuity

“Since it’s a small system, it’s a perfect fit for learning about this technology. For bigger satellites, it will take years, even decades to develop one of them. The nanosatellite, on the other hand, fits neatly within the two years allotted to the postgraduate students to produce them,” Co added.

In December last year, a new batch of STeP-UP scholars was selected to build Maya-5 and Maya-6.

For Co, the STeP-UP project ensures the continued development of space technology in the country. “We have to [spread] this knowledge; if only the same groups of people are working on it, that would be a waste,” he said.

The current team managed to continue working on their Mayas despite the pandemic and the lockdowns by devising a test and uploading system that allowed them to, well, work from home. For certain tasks that could not be done remotely, the scholars asked permission from the EEEI to do the tinkering at the UP Diliman laboratory.

For someone with a mind set on making his first small steps in space technology, Wee had an apt way of putting it: “Our Polaris (North Star) in relation to the development of Maya-3 and Maya-4 is to do this for our country and finish what we started.”