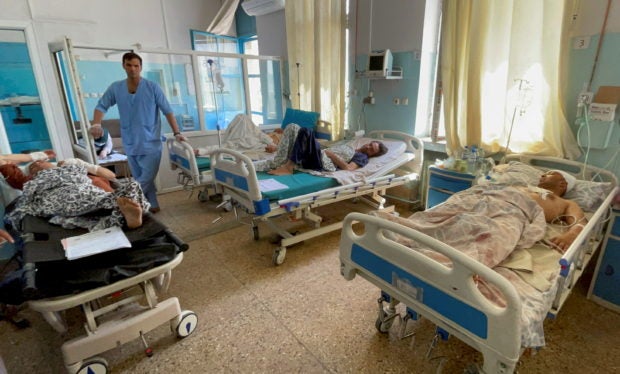 Wounded Afghan men receive treatment at a hospital after yesterday’s explosions outside the airport in Kabul, Afghanistan August 27, 2021. REUTERS/Stringer

Medical staff at Kabul’s Emergency Hospital worked through the night into Friday treating casualties from the twin blasts that tore through crowds waiting outside the airport. They are fearful about what comes next.

At least 85 people were killed in the attack, claimed by the Islamic State in a terrifying return of suicide bombings that were a regular part of life before the Taliban’s conquest of the city less than two weeks ago.

“Everybody is concerned at this moment in Kabul, nobody knows what to expect in the coming hours,” said Rossella Miccio, president of the Italian aid group that runs the hospital.

She said staff in its three operating theatres had worked into the early hours of the morning to handle more than 60 patients, of whom 16 died of their injuries as they arrived.

“It was very tiring, exhausting. They finished with the last patient around 4 a.m. this morning, so the three theatres have been working all night long basically,” she said.

“Fortunately all the colleagues that were supposed to come to work today are … there and they didn’t face any major problem on the way to the hospital.”

But with rumors circulating that numbers of Islamic State may be at large in Kabul, the mood in the city was tense, with some expecting more attacks to come as the chaotic evacuation continued at the airport.

While the Taliban have been dismantling the concrete blast walls put up around the city over the years, the airport attack was a bitter reminder that the fall of the Western-backed government may not mean the end of suicide bombings in Kabul.

“I think people are scared that there is a sort of suspended feeling, atmosphere, people are so scared of going around,” said Miccio.