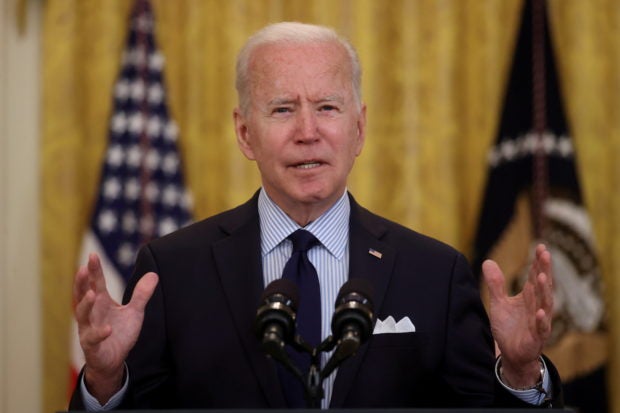 Israeli Prime Minister Naftali Bennett met Friday with President Joe Biden a day after a deadly bomb attack on the US Afghanistan evacuation mission forced a postponement and cast a shadow on an Israeli charm offensive.

“My heart goes out, our hearts go out, to all those who we’ve lost,” Biden said after the two met one-on-one, a day after originally planned.

Bennett began his remarks with condolences before announcing, “I bring with me from Jerusalem a new spirit of good will.”

Bennett had aimed to reboot US-Israel relations following Benjamin Netanyahu, who during 15 years in office embraced Republicans and antagonized Democrats.


Pagcor chief: Over half of POGOs closed, left PH for Cambodia, Vietnam, Laos

Still, the 49-year-old premiere in his first official overseas visit kept to many of his predecessor’s hardline views.

“We cannot lose sight for even one moment that we’re in the toughest neighborhood in the world,” he said, citing ISIS, Hezbollah, Islamic Jihad and Hamas. “That’s why Israel always has to be overwhelmingly stronger than… all of our enemies combined.”

Bennett took office in June as head of an eclectic coalition in which his hawkish party holds only a handful of seats. His government includes pro-settlement hardliners like himself as well as political doves and the first Arab party to sit in a coalition.

“He heads and leads the most diverse government in Israeli history,” Biden said of Bennett.

Bennett’s positions on key issues remain at odds with the White House.

He has said he will continue settlement construction and is against a Palestinian state in territories Israel captured in 1967.

He opposes the US reopening a consulate in Jerusalem to handle Palestinian affairs, which Trump shut in 2019 after moving the US Embassy from Tel Aviv to Jerusalem.

“Israel knows that we have no better or more reliable ally in the world than the United States of America,” he said.

Biden said the US had an “unwavering commitment” to Israel’s security, including replenishing Israel’s Iron Dome missile defense system. In a hint at differences of opinion, Biden said, “we’re also going to discuss ways to advance peace and security and prosperity for Israelis and Palestinians.”

Shibley Telhami, a professor for peace and development at the University of Maryland, estimated that the attack in Kabul would not impact Biden’s posture on the Palestinians.

“It further lowers the Israeli-Palestinian issue on Biden’s priority which means he is even less likely to challenge Bennett on this issue.”

Bennett said in the Oval Office that the bombings in Kabul highlighted the potential danger of a nuclear Iran.

“These very days illustrate what the world would look like if a radical Islamic regime acquired a nuclear weapon,” Bennett told Biden.

Israel fiercely opposes Biden’s attempt to reverse Trump’s withdrawal from a 2015 nuclear deal that lifted sanctions on Iran in exchange for curbs on its nuclear program.

Since Trump’s move, Iran has itself withdrawn from key commitments, including on uranium enrichment.

Biden pledged the US was committed to ensuring “Iran never develops a nuclear weapon, but we’re putting diplomacy first and seeing where that takes us. But if diplomacy fails we’re ready to turn to other options.”

Dan Kurtzer, former US ambassador to Israel, told AFP Bennett’s visit would set a new tone even during disagreements.

“The Netanyahu years, especially with Democratic presidents, were marked by a lot of rancor from the Israeli side and disrespect frankly for the presidency,” he said.

Friday, the two leaders made efforts to show intimacy.

“You’ve been so generous with your time in these difficult days,” Bennett said.

“I’ve known every Israeli prime minister since Golda Meir, said Biden, 78, referring to the leader who served in the 1970s. Bennett, he said, had traveled the same train that Biden is famous for.