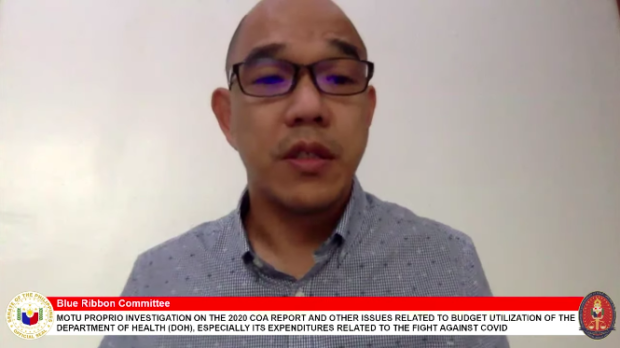 MANILA, Philippines — A lawmaker contested the claim of Procurement Service executive director Christopher Lloyd Lao that he never reported directly for Senator Bong Go after showing him a letter in which he signed as undersecretary of the Special Assistant to the President (SAP).

Prior to being senator, Go was special assistant to President Duterte, and had even preferred to be addressed simply as SAP.

During the hearing of the House committee on public accounts on the Commission on Audit (COA) reports about the Department of Health’s pandemic funds, Lao insisted that he was an undersecretary of the Presidential Management Staff (PMS).  Lao was appointed head of the Procurement Service of the Department of Budget and Management (DBM-PS) in January 2020, but resigned six months after.

However, committee chairperson and Probinsyano Ako Rep. Jose Singson showed him a letter wherein he signed as undersecretary in Go’s office before his election as senator in 2019. Singson was referring to the letter sent by Lao to Philippine Navy officials at the height of the frigate deal issue in 2018.

House committee on public accounts chairperson Rep. Jose Singson shows lawyer Christopher Lloyd Lao a copy of a letter which the latter signed as undersecretary of the Office of the Special Assistant to the President, amid his denial that he directly reported to now-Senator Bong Go.

When asked further if he reported to Go directly, Lao insisted that his office, PMS, is one of several offices supervised by Go.

“Basically you reported directly to the Special Assistant to the President?” Singson asked again.

“We report directly to the Presidential Management Staff under Undersecretary (Ferdinand) Cui, then he consolidates it and reports, submits a summary, to the Office of the Special Assistant to the President,” he claimed.

But Singson stressed that Lao could have signed it as undersecretary of PMS, yet he chose to prioritize first the Office of the Special Assistant to the President.

Lao is currently in hot water after COA’s audit report on DOH for 2020 showed that P67.32 of the agency’s COVID-19 funds contained deficiencies, which led to missed opportunities amid the pandemic.

During a Senate hearing on the same issue, the blue ribbon committee noted that the PS-DBM then under Lao purchased face masks at P27 per piece and face shields at P120 per piece during the early months of the COVID-19 pandemic.

In contrast, committee chair Senator Richard Gordon — who also heads the Philippine National Red Cross — revealed that they purchased face masks worth P5 per piece and face shields at P15 per piece during the time when

PS-DBM made their own procurements


Sara Duterte to decide on her possible run for the presidency, says HNP