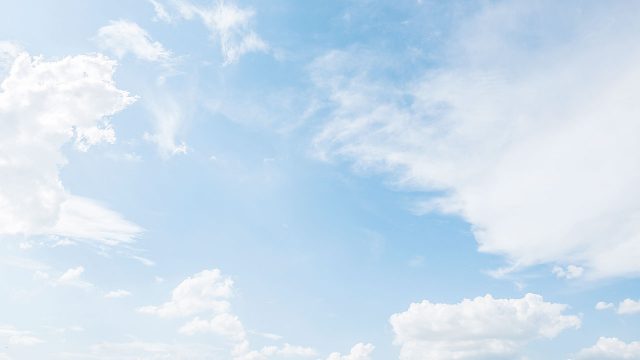 has confirmed much that we already knew: Human activities have caused an unprecedented warming of the Earth and, as a result, we’re seeing more frequent droughts and heat waves, extreme rainfall and

Still, many aspects of climate remain uncertain, and some are quite puzzling. An important one of these is climate sensitivity, defined as the rise in average global temperature that’s expected to result from a certain increase (often taken as a doubling) in the atmospheric concentration of carbon dioxide. In 1979, MIT meteorologist Jules Charney first estimated this to be in the range 1.5 to 4.5 degrees Celsius. In the 42 years since, remarkably, scientists have learned very little more about this quantity, even as the computers they use to model climate and weather have grown a trillion times more powerful.

What’s especially odd is that this persistent uncertainty stems, at least in part, from something even non-scientists know very well: clouds.


Clouds are involved because of the basic reality that shifting the atmosphere to a slightly higher temperature evaporates water, producing more of them. More clouds, in turn, would be expected to either drive temperatures up further, or to lower them. But researchers aren’t sure which way things will go, because clouds can have different effects.

During daytime, they reflect light up toward the sky, reducing the amount of heat reaching the ground. More clouds reflect more light and heat. At night, on the other hand, clouds act like blankets, trapping heat that might otherwise escape the atmosphere and radiate away.

You might think that scientists could use computers to simulate the complexity and solve their riddle. But clouds, although big on the human scale — stretching to as much as a mile or more wide — are tiny compared with the whole atmosphere, too small for scientists to include in any sensible way in today’s computer climate models. The models work by breaking up the atmosphere into discrete parcels, generally well over 10 miles wide, and they either leave clouds out or only approximate their effects. The amount of cloud cover in a region might be estimated as proportional to the local humidity, for example.

Another problem with clouds is that they’re made of water, one of the most complex substances in the universe, able to change easily from solid to liquid to vapor, and often coexisting in one small region as all three. So, the number of possible pathways for further feedback is mind-boggling. Even the best climate models contain significant uncertainty about the state of clouds at any temperature — in particular, how much water they hold, and whether that water is liquid or frozen. And these uncertainties translate into errors in projections of climate sensitivity under temperature change.

One slightly perverse outcome of this situation is that efforts to improve some of the components in climate models — making clouds’ liquid-ice mixture more realistic, for example — have actually been found

to make the overall models worse

. This is because other components of the models, including calculations of how quickly clouds rain out their moisture, have made compensating errors. It will take improvements in both to get a better end result.

Hence, the road to perfection in climate models is winding, and full of obstacles. The latest IPCC report now estimates the climate sensitivity to be in the range 2.5 to 4.5 degrees C, shifting slightly toward the higher end of Charney’s original estimate. This suggests the planet is likely to be slightly more sensitive to continuing greenhouse-gas emissions than scientists had thought, which is not exactly a reassuring thought.

The climate forecast is ever so slightly more certain than before. But the picture remains cloudy — in part, because of clouds.