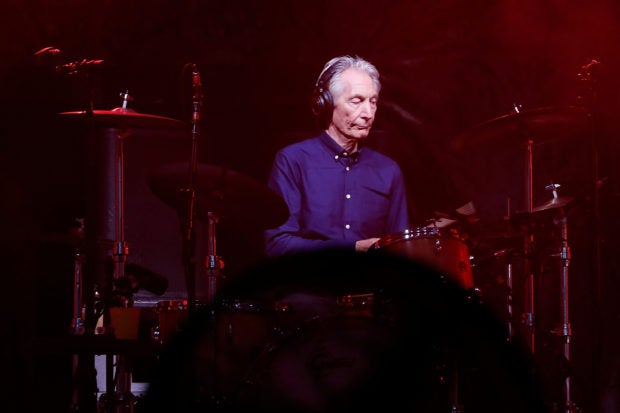 Charlie Watts of the Rolling Stones performs during a concert of their “No Filter” European tour at the new U Arena stadium in Nanterre near Paris, France, Oct. 19, 2017. Image: Reuters/Charles Platiau

Rock stars and other fans across the globe reacted on Tuesday to the death of Charlie Watts, widely regarded as one of the coolest men in rock during his nearly 60 years as a drummer with the Rolling Stones.

“I knew he was ill but I didn’t know he was this ill… Condolences to the Stones. It’s a huge blow to them because Charlie was a rock and a fantastic drummer, steady as a rock.”

“A very sad day. Charlie Watts was the ultimate drummer. The most stylish of men, and such brilliant company.”

“I’m just shocked to hear about Charlie Watts. I don’t know what to say, I feel terrible for Charlie’s family. Charlie was a great drummer and I loved the Stones music, they made great records. Love & Mercy.”

“So saddened to hear about the passing of Charlie Watts. An absolute inspiration to a legion of drummers since the 1960s. A man of grace, style, dignity and composure.”

“Rest In Power #CharlieWatts RIP. You are a smooth brother. Thanks for all the great music.”

“Tom T. Hall, Don Everly, and Charlie Watts in less than a week. This is a kick to the gut.”

“This is terribly shocking. Not just one of greatest drummers in one of the greatest bands of all time, but a gentleman’s gentleman. He singlehandedly brought the Rock world some real class. Rock and Roll will miss him profoundly. We are significantly less without him.

“RIP Charlie Watts, one of the greatest rock drummers ever and a real gentleman.”

“AWFUL NEWS. One of the true timeless icons and the backbone of the Stones. Hard to fathom the loss. So very sad.”

“Charlie Watts was the most elegant and dignified drummer in rock and roll. He played exactly what was needed – no more – no less. He is one of a kind.”

“Exile On Main Street is a messy rock’n’roll masterpiece. Nothing happened in the studio each night until Charlie found the rhythm to whatever riff Keith was unearthing. Once they locked onto each other, things happened. He was the engine of the Rolling Stones. RIP Charlie Watts.”

“For those of us that love music, we’ve lost one of the true pioneers of rock-n-roll. A consummate performer and an even better human. There’s so much to say about Charlie, but for now we will listen to the gift he gave us all – his music.”

“No matter what song the Stones played… it always had a deep groove… that was Charlie Watts…he will be missed.”

“Not a rock drummer, a jazz drummer really, and that’s why the Stones swung like the Basie band!!”

“The beat of The Stones. There are no words, every groove has spoken for itself.”

“A hero is gone. No words. A huge gaping hole in the universe.”

“Devastating news, those in the know know he was the heart & soul of the band.”