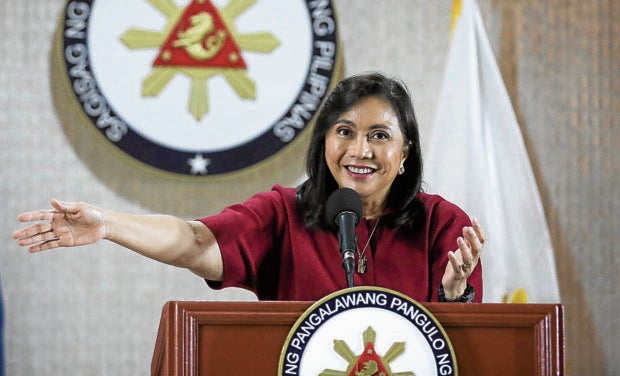 MANILA, Philippines — Vice President Leni Robredo has admitted launching imperfect programs due to the urgency of responding to the COVID-19 pandemic, adding that the approach has been to provide what is needed first before fine-tuning these initiatives.

Robredo said during the Archer Talks and Eagles Meet Our Leaders Forum on Tuesday that a medical volunteer doing work for their Bayanihan E-Konsulta initiative — the telemedicine channel launched by the Office of the Vice President (OVP) — told them before that it seemed her office led them to “jump off a cliff before even fixing the airplane.”

The Vice President was asked what advice she could give young and aspiring volunteers who want to initiate programs amid the health crisis but are hindered by several circumstances.

(There was a comment from one of their volunteers as we were doing Bayanihan E-Konsulta. Because when we needed such program we immediately launched it even if things were not ironed out. So one of our volunteers said they felt we dragged them to jump off the cliff, and then fixing the airplane while going down.)

But Robredo noted that it was just the way things go amid the COVID-19 pandemic. What is more important, she said, was to give the public the service they badly need while addressing minor concerns — rather than waiting for so long just to present a perfect system.

What’s important, the Vice President added, is that leaders like her never stop learning and stay open for pointers for improvement.

(And you know, most of the things that we’re doing with Angat Buhay, with our COVID response operations, it’s like that. We no longer perfect it before we launch it. When we need it, we do it and adjust later on.)

(Almost all of the things we are doing are done in that manner and I think, this would help young people to understand that they were once in my position.  And there are several things that I still don’t know until now, but you can only learn by doing it.)

Last April, Robredo’s office launched the Bayanihan E-Konsulta as a COVID-19 surge affected Metro Manila and its nearby provinces. The concept came as hospitals in the area went way above their capacities, forcing patients to wait on parking lots and makeshift tents outside the facilities.

What Bayanihan E-Konsulta did was to reduce possible hospitalizations, especially those not really COVID-19 related, by having an array of volunteers checking patients virtually, serving as a form of a triage system.  It also coordinated with the One Hospital Command Center in referring patients to hospitals amid increasing infections.

The online consultations done through Facebook messenger waned down after the previous surge was addressed, but Robredo recently noted that they saw a spike in message requests as the Philippines faced another surge, this time due to the COVID-19 Delta variant.

Prior to Bayanihan E-Konsulta, other programs were initiated by OVP like providing free shuttles, dormitories, and personal protective equipment for frontline workers, mobile COVID-19 testing, and COVID-19 drive-thru vaccinations.

But despite these, Robredo said that they want to do more programs, but they are limited by resources like manpower and budgetary constraints.

(We have felt frustrated because we always see that we lack in things, we are severely limited to do what needs to be done.  But for me, we do what we can do right now.  Let us not dwell on what we cannot do.)