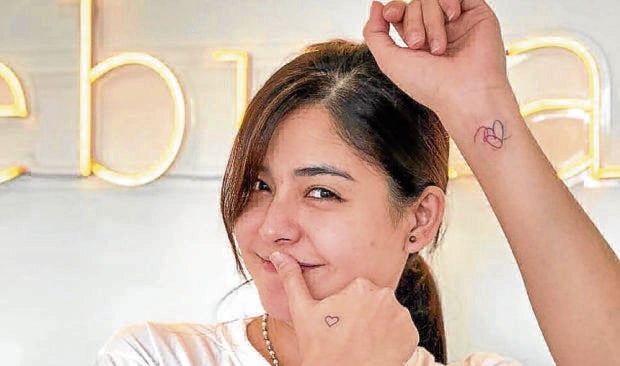 Shaira showing off her BTS tattoos

During a time when she was “down, depressed and sick,” Shaira Diaz found comfort in the boy band BTS and their music.

“I got hooked on them when I was really, really down. And it was their songs that kept me company … I also didn’t go out of the house for a long time because of the quarantine. Watching their performances comforted me,” she said at virtual conference for her recent contract renewal with GMA Artist Center.

She fell in love with BTS, so much so that she decided to get tattoos of images associated with the Korean group: a purple heart on her left hand and, on her right wrist, the symbol featured on the album “Love Yourself: Answer.”

“I had been meaning to get tattoos—just small ones—for quite some time now. I was inspired to have their logos tattooed on me,” related the 26-year-old actress. “It was painful! I have a low tolerance for pain, so I was crying during the process. I decided to get the two tattoos in one go, para isang sakitan na lang! But I’m very happy. It was all worth it.”

Now, even her boyfriend of eight years, Edgar Allan Guzman, is into BTS’ music.

“I’m very thankful because he’s supportive of my fangirling. He lets me play BTS songs in the car because he has grown to like them, too. And who wouldn’t be impressed? The performances are so good. And if you read the translation of their lyrics, you will realize how deep they are,” said Shaira, whose favorite member is Jungkook.

But as supportive as Edgar is, he also makes sure that the 26-year-old actress doesn’t go overboard shopping for BTS merchandise. “He doesn’t mind me buying merch. But if he feels like I’m spending too much money on my fangirling, he would remind me, ‘O, baka mamaya maubos ipon mo.’ He doesn’t let me get sucked into spending. He gives me balance,” she related.

Shaira is part of the upcoming action-fantasy series “Lolong,” which she will top-bill with Ruru Madrid and Arra San Agustin. She plays Elsie, an upstanding environment and wildlife conservationist. “Protecting the environment is her advocacy. And nothing angers her more than people who destroy nature out of their greed,” she said. 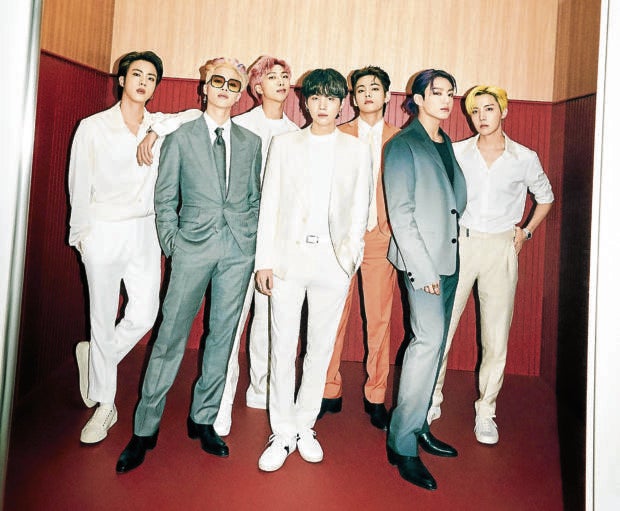 She described her costar Ruru as “humble” and “approachable” … “a gentleman.” “It was fun working with him. I didn’t really expect that we would click that easily. And the more I worked with him, the more comfortable I got. He’s a gentleman with no airs. He’s funny, too,” she said. “There was no awkwardness or adjustments needed.”

The two Kapuso talents first worked together in the drama anthology “I Can See You.” And the positive feedback they received from fans gave them a confidence boost going into “Lolong.”

“The comments were positive so we’re happy. Whenever I post photos of us on social media, they would get thousands of likes. I couldn’t believe that the fans would be this happy to see us working together,” said Shaira, a product of the TV5 talent search “Artista Academy.”

Shaira, who transferred to GMA 7 in 2018, feels thankful and blessed that her contract was renewed at a time when projects for actors aren’t as regular. “It means a lot to me. I feel that the network trusts me enough to give me big projects,” she said.

Her wish for the rest of 2021 is more shows and opportunities to work with her idols, like Bea Alonzo. “I have worked with her before and she was so nice. So when I learned that she transferred to GMA 7, I said, ‘Sakto!’ I’m happy she’s here and I hope to work with her. Whenever I get asked who’s my career peg, I always say it’s Bea,” Shaira said. INQ