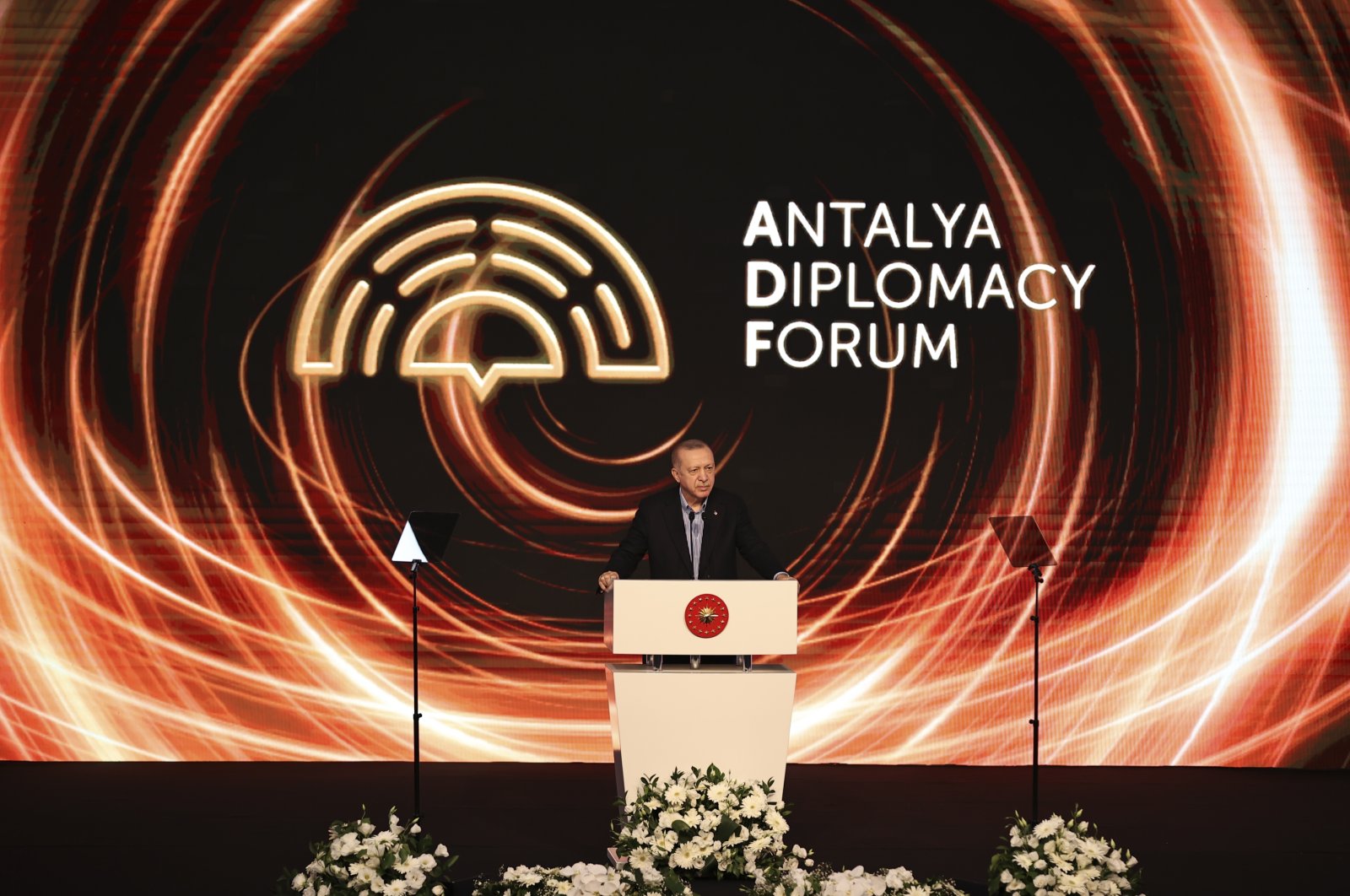 The international community failed to effectively manage the devastating impacts of the COVID-19 pandemic, President Recep Tayyip Erdoğan said Friday during the opening speech of the Antalya Diplomacy Forum.

“We should not allow vaccine nationalism and not repeat the same mistakes over the pandemic period,” Erdoğan said.

He added that once the domestic vaccine is ready, Turkey will share it with all of humanity.

Turkey looks forward to increasing cooperation in all geographies from Africa to Latin America, the Pacific and Asia in the upcoming period, he stated.

Highlighting that Turkey managed to eliminate at least 4,500 Daesh terrorists so far, he noted that under the pretext of the fight against Daesh, the U.S.-backed YPG, the PKK terrorist group’s Syrian branch, attempted to establish a terrorist state near Turkey’s southern border.

Foreign Minister Mevlüt Çavuşoğlu also said in an introductory speech: “We are living through one of the most fluid and uncertain periods of interstate and international relations. There is a constant shift in the balance of power. States are in a competition, even a struggle, besides cooperation. We hear the cries of an international system that is trying to survive in strong turbulence.”

“Turkey has the fifth largest foreign organization with 252 representations that we entrust to expert staff in the world, including the most difficult geographies. We apply entrepreneurial diplomacy that tries to solve problems in every corner of the world, both at the level of leaders and at the level of embassies,” he added.

Politicians, diplomats, opinion makers and academics from around the world have gathered in Turkey to discuss global issues at the Antalya Diplomacy Forum.

Erdoğan will also host a dinner for the participating heads of state on the first day of the gathering. The forum will continue with various panel discussions through Sunday.

The event is being held at the NEST Congress and Exhibition Center in the Mediterranean resort city of Antalya under the theme of “Innovative Diplomacy: New Era, New Approaches.”

Debates of global importance, including the Balkans, the future of Europe, the trans-Atlantic relations, the refugees and migrants as well as the threats of terrorism, will be analyzed in-depth during the three-day forum. There will also be a session on Turkey’s proposal for the Eastern Mediterranean Conference.

Çavuşoğlu said in a press conference on Wednesday that they “want a liberal discussion platform which can reflect different perspectives.”