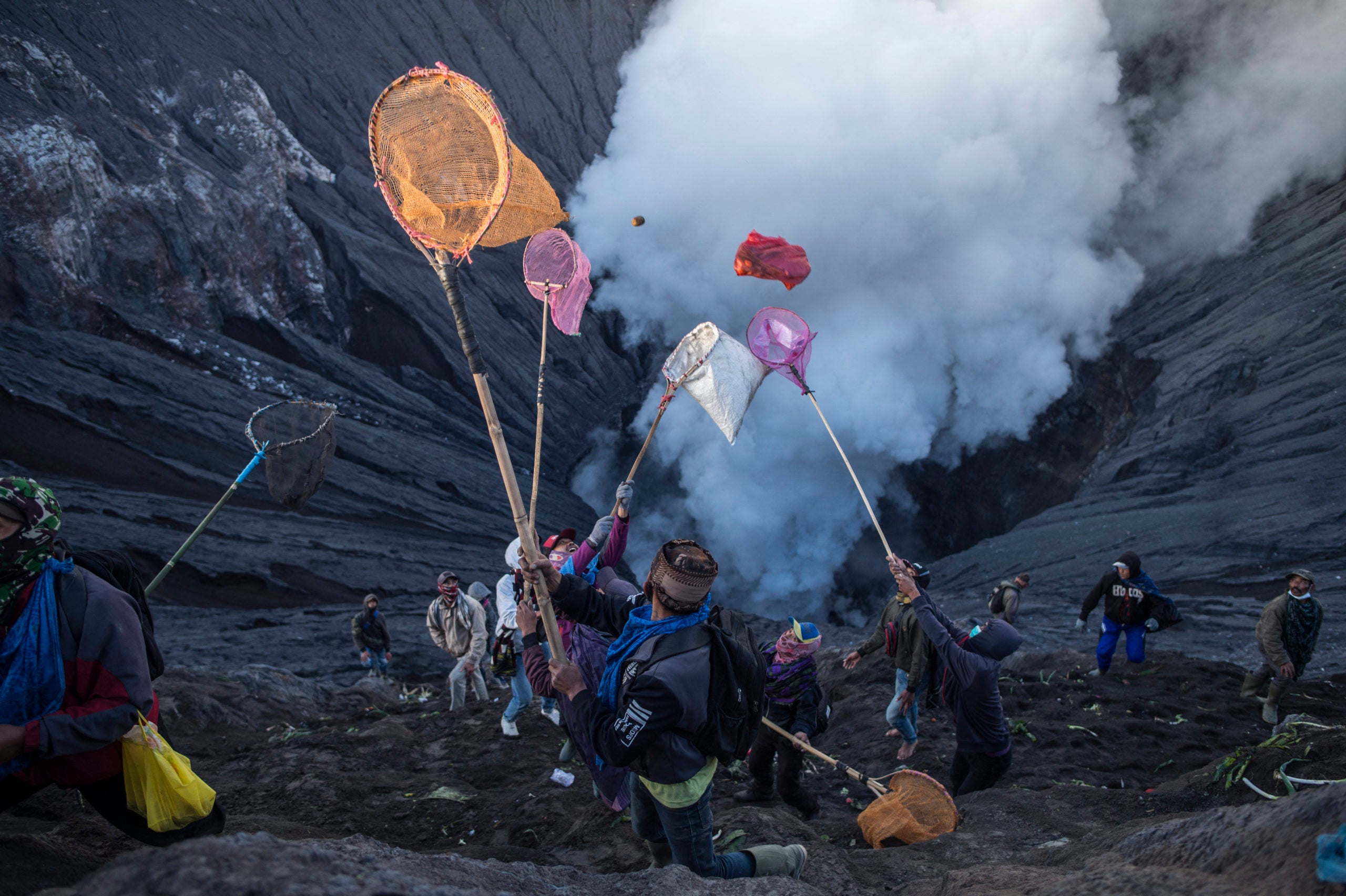 People try to catch offerings thrown by Tengger tribe people off the summit of the active Mount Bromo volcano in Probolinggo, East Java province on June 26, 2021, during the Yadnya Kasada festival to seek blessings from the main deity by presenting offerings of rice, fruit, livestock and other items. (Photo by Juni Kriswanto / AFP)

PROBOLINGGO, Indonesia —  Thousands of worshippers trudged up an active Indonesian volcano Saturday to cast livestock and other offerings down its smouldering crater in a centuries-old religious ceremony.

Every year people from the Tengger tribe gather from the surrounding highlands to throw fruit, vegetables, flowers, and even livestock such as goats and chickens into Mount Bromo’s crater as part of the Yadnya Kasada festival.

A long line of worshippers, some with goats slung across their backs, made their way to the top in the hopes of pleasing ancestors and Hindu gods — and bringing prosperity to their communities.

“Today I brought a chicken for the ancestors,” said Purwanto, who like many Indonesians goes by one name, as he showed off his colorful hen.

Another worshipper, Wantoko, carried his own crops in the hopes that casting them into the volcano would bring good luck.

“I brought these crops so that my fields will be fertile and I have a good harvest,” he said.

“I come here every year.”

Standing on the crater’s steep slopes, other villagers — who are not members of the Tengger tribe — try to catch the offerings using nets and sarongs before they disappear into the billowing smoke.

This is not technically part of the ritual but reflects local frugal urges not to waste the offerings.

“It can’t be held in another place or be done virtually,” said Bambang Suprapto, head of the area’s Hindu community association.

“But organizers applied strict health protocols and they’ve been tested for the virus so we can protect everyone who attended.”

The month-long festival dates back to the 15th-century legends of the Javanese Hindu Majapahit kingdom’s princess and her husband.

Unable to bear children after years of marriage, the couple begged the gods for help.

Their prayers were answered and they were promised 25 children, as long as they agreed to sacrifice their youngest child by throwing him into Mount Bromo.

Legend has it this son willingly jumped into the volcano to guarantee the prosperity of the Tengger people.

The sacrifice tradition continues to this day — though the Tengger sacrifice their harvest and farm animals instead of humans.