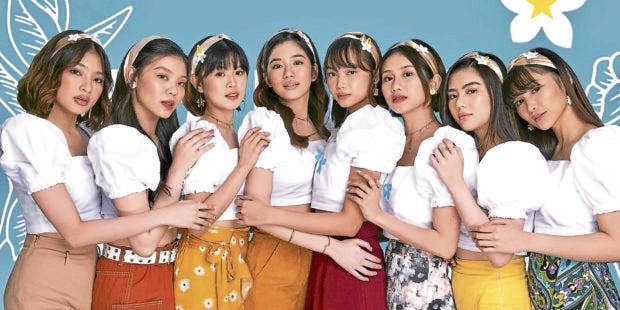 The all-Filipino girl group Bini will be releasing its first album, which will include different versions of its single “Born to Win,” and will be having its first full concert alongside male-group counterpart BGYO in the last quarter of 2021.

ABS-CBN TV productions head Lauren Dyogi made this announcement during the concluding portion of the two-part show, “Bini: The Launch,” which streamed on ktx.ph recently.

Dyogi said the eight-member group will record “Born to Win” in Spanish, Thai, Japanese and Bahasa Indonesia. He added that the group’s official merchandise will likewise come out later this year.

“Continue to make your family proud, and the country, prouder. We will cheer you on. And together with your brothers in BGYO, I know you will trailblaze and lead the global phenomenon,” Dyogi declared.

The Kapamilya exec also shared with the audience the Bini’s three-year journey, from the time they auditioned via the show “Star Hunt Academy Camp” until that day when they gathered onstage once again for their official launch as a Kapamilya act. Dyogi recalled: “You went through a lot. You underwent training, which your bodies were not used to before. I remember Colete would be brought to the clinic because of pure exhaustion. At that time, I thought she wouldn’t survive the training. Look at her now!”

He continued: “All of you were having self-doubt. You asked, ‘Kaya ko ba ito? Ito ba ang gusto ko? Is it all worth it?’ Aiah and Gwen first had to go home to their families, but they came back stronger. I’m also very proud that Sheena and Jhoanna carried on despite experiencing great loss in their respective families. We’re glad that you were able to show resilience and you found comfort in the company of your sisters.”

Sheena’s mom and Jhoanna’s grandfather passed away while the girls were in training camp.

“You all battled homesickness. All of you went through teenage issues. You were also trying to get used to each other’s personality, being that you came from different backgrounds,” Dyogi observed. “Maloi, Stacey and Mikha, you’ve all evolved to being very responsible ladies. You all had three years of seemingly insurmountable challenges, but you persevered, worked hard and sacrificed a great deal of your youth. As I look at you now, I only feel pride and admiration because you’ve all blossomed into beautiful binibinis, inside and out… While you can do a lot of things, nothing can limit what you can do as a group. In your heart, you know that you’re born to win.”

As a predebut project, which was also part of their training, the girls recorded their version of Ryan Cayabyab’s “Da Coconut Nut,” originally by Smokey Mountain. Meanwhile, “Born To Win,” which speaks about a person’s courage, strength and determination, is an original electronic pop material that Bini worked on with MU Doctor, a South Korean group of trainers in voice and dance.

MU Doctor worked with Helsinki-based artist/composer Eva Louhivouri on the lyrics. Cube Entertainment is attributed for the dance routine.

Bini likewise worked with fashion designer Francis Libiran for three sets of bespoke ensembles that were unveiled in the first part of “Bini: The Launch,” titled “The Runway.”

During a brief virtual chat with writers, the Bini members were asked what they think would make them last longer in the business. To this, Jhoanna replied: “We make sure to continuously reinvent ourselves. We always try to learn new things. We likewise accept feedback, whether good or bad, and show respect to people around us. We treat what we do as our passion. This way, we never feel tired.”

For Aiah, it’s important that she and her teammates are open to constructive criticisms, “but when it comes to negative and hurtful comments, we know they’re unavoidable so we just let them pass. We constantly remind ourselves that life is beautiful, that we are blessed and are born to win.”

As to what they look forward to doing individually and as a group, Maloi share that she would want to go to church with her family. “To others, this may sound simple, but this is really a big deal to me. I’ve been away from my family for a long time, so small and simple tasks like this will surely make me happy.”

Aiah added: “Since it’s been such a long time since we were allowed to go out, all of us want to go back to our respective hometowns/provinces.

“We also want to see other places in the country, and hopefully, travel all over the world to perform. We want to see everyone (their fans) personally. We only get to meet them virtually these days.”

The first part of “Bini: The Launch” was aired last Saturday while the second part was shown yesterday on the Kapamilya Channel. INQ