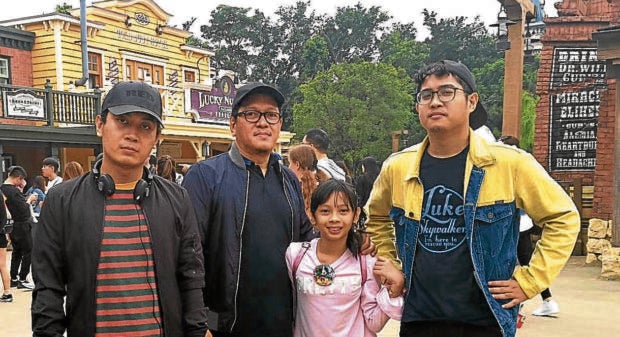 Raymond Red (second from left) in Hong Kong in 2019 with sons Mikhail and Nikolas, and daughter Rain

Films and making films have become so much a part of the lives of Raymond Red and his two sons, Mikhail and Nikolas, that talking with them for this Father’s Day feature is similar to taking a crash course on this particular art form.

It’s amazing how the Reds would often make references to the state of local movies at a particular time in order to answer, let’s say, a question on Raymond’s parenting style, or what dating tips and filmmaking hacks Mikhail and Nikolas got from him.

Also in this interview, the elder Red would repeatedly mention that he never forced his sons to be filmmakers like him. “It happened naturally because they saw me watching movies, and eventually making them,” insisted Raymond, who is one of the pioneer figures of modern Filipino independent and alternative cinema.

Later, Raymond would say he realized that “it’s really in their blood” when he saw and was impressed with the short films that younger son, Nikolas, made as a fine arts student.

Raymond also said he understood why his sons never considered him as their mentor.

“Because whether they liked it or not, there was a natural mentoring that happened while we were talking about the films we’ve seen together. The lessons were never formal. I didn’t ask them to sit down so I could discuss with them all about the camera and lenses. I was too busy with work then. They learned by observing,” said Raymond, who is also a lecturer at the University of the Philippines Film Institute.

Mikhail, who made his first full-length feature (“Rekorder”) at age 21, agrees.

“My interest in film began so organically. It was like an interesting game for me. I began making short films for fun. In the process, I learned about the film language. I would shoot home videos and edit them. Eventually, I upgraded my material. I became more serious about what I was doing,” the 29-year-old recalled. “I think that was a better approach [to learning] instead of the formal way. The progression felt easy and natural because it was fun.”

Nikolas said that when he eventually consulted Raymond, it was to ask about the classical style of filmmaking. He explained: “I’ve managed to make two short films, and one of them is a silent movie. To get the feel and look I wanted, I consulted Dad about cinematography. He made silent films before, and it’s his forte, aside from his classical films na sobrang pantay ang ratio. I asked him which kind of light I should use to achieve the kind of black-and-white feel that I wanted.”

Meanwhile, Raymond admitted to not feeling comfortable giving love advice to his sons, having separated from their mom some 15 years ago. He described himself as a “very casual” father. He explained: “We even came to a point when they would call me ‘dude’ and not ‘dad’ anymore. I don’t get offended. They were still in high school when their mom and I separated. Ever since then, they would already speak their minds. We would debate on things we’ve seen onscreen over bottles of beer.”

“We learned a lot from [the experiences of] our dad and mom,” said Nikolas. “Theirs is like a cautionary tale,” added Mikhail, laughing.

“Yes, from their mistakes we already know what to do,” said Nikolas. “Right now, I’m in a relationship, too. Looking into the future, I know the do’s and don’ts, or at least, the things you have to be cautious of going into a relationship.”

Raymond interjected: “I guess what’s more important is that we became so close that we can talk about serious matters in a way that’s honest and in-depth. I was able to explain to them why their mom and I broke up. Of course, any separation is painful, but I see that they understood what had happened even at a young age. They were able to adjust to the situation. We’ve remained close, even though we no longer live together.”

Mikhail stays at a condo in Mandaluyong, while Nikolas stays with their mom in Pasig. Raymond now lives in Laguna with his partner and their children Rain, 13, and Ram, 5.

Mikhail then pointed out that it’s hard to ask direct advice from his dad because they’re from different generations. He even went so far as to compare the cost of living today to that of his dad’s in the 1990s.

“You will be surprised that while there are a lot of successful filmmakers today, most of them still struggle financially. Back then, my dad may already be a father at 27, but he has also managed to secure a home for us,” Mikhail pointed out. “I would also explain that, yes, while there were challenges before—technology wasn’t as accessible—the ratio of talent fee to the cost of living then was also different. Today, ours is the third most expensive city to live in here in Southeast Asia.”

“Mind you, this is just for a question on dating tips. Ang layo na ng narating!” Nikolas interjected. “More often it’s really my dad and Mik who would end up debating. I’m usually the observer to their conversations. I butt in once in a while, but I don’t act as referee. I sometimes add fuel to the fire.”

Living up to the legacy

In a previous interview for an international publication, Mikhail said that instead of living up to the legacy of his dad in experimental cinema, he chose to try to make the films that he enjoyed doing and what he wanted to see as an audience.

“If you look at our trajectory, they’re different,” Mikhail pointed out. “We’re both passionate about cinema, our taste is very diverse. I ended up working for the studio system but I still go through the independent side of funding by attending project markets. Compared to dad who is very specific with what he wants for his cinema, I’m more open. Right now, I’m doing a series for HBO Asia (“Halfworlds”). I enjoy stepping out of my comfort zone. That’s what I meant about trying to enjoy the process and its challenges, instead of trying to recreate what Dad is doing. We’re like the Cronenbergs. They’re a father-and-son team, but they both dabble in experimental cinema. It wasn’t on purpose, it happened very naturally, but my work ended up different from Dad’s.”

“What people has to realize about Dad is that he can take time with his passion projects, or his more personal ones, because he does TV commercials to make a living. What happened to me and Nikos, right now at least, is that we get our livelihood exclusively through films,” explained Mikhail. “Naturally, you have to make films more often and from time to time you really have to access the studio system because that’s where you get funding more quickly. That, I observed, is the major difference between us. This is something that film students should consider also. There should be balance. Of course, it’s possible to simply live off grants. It’s really up to you. Film careers are different for each artist.”

More than trying to live up to his dad’s name, Nikolas said he feels more pressured being Mikhail’s brother. “Mik is my contemporary. There’s some sort of sibling rivalry going on. I am an aspiring filmmaker so I want to at least be at par with him some day. Right now, I’m happy being his editor. In fact, I’m actually starting to believe that I’m better supporting him as an editor than being a filmmaker on my own, but sayang naman since I’m a Red. I’m determined to make my film one day.”

“I’m very proud and happy with what my sons have achieved,” declared Raymond. “I’m excited that they’re collaborating. They work with the major studios — Star Cinema and Globe. I admire them for that.” He likewise admitted that “it takes me years to brew and put together a project. Right now, I’m trying to get off the ground again with a 28-year script, titled ‘Makapili.’ This is my kind of cinema.’’