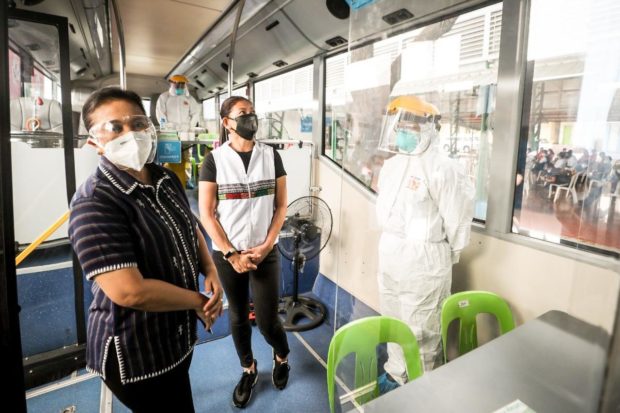 FILE PHOTO: Vice President Leni Robredo during the rollout of the OVP Swab Cab in Marikina. Image from her Facebook page

MANILA, Philippines — Vice President Leni Robredo’s camp on Monday asserted there is no politics to citing facts on Davao City’s rising COVID-19 cases and shot down efforts to drag her into a political discussion for it.

This comes after Davao City Mayor Sara Duterte-Carpio told the Vice President to keep out of Davao City’s COVID-19 problems, even urging her to “avoid involving the COVID-19 surge in Davao City in her attempt at politicking” as Robredo earlier said that Davao City could consider some pointers from other cities, such as Cebu, which have also experienced case surges.

Robredo’s spokesman, Atty. Barry Gutierrez, pointed out that the Vice President has always been focused on her office’s initiatives that help various local government units (LGUs) and civil society organizations and sectors respond to the COVID-19 pandemic, including raising suggestions on how to deal with issues related to the public health crisis since it hit the country last year.

(It is the Vice President who is being forcibly dragged into politics even while her main focus has been to help.)

(In Cebu, Tuguegarao, Palawan, in so many other areas — it’s not for photo op or tarpaulins, not for pictures playing coy with politicians who are in charge of those areas. VP went there, listened to the people on the ground, found immediate as well as long-term solutions to what they have been going through.)

According to Gutierrez, Robredo is willing to work with Davao City to curb its COVID-19 infections — if her assistance would not be politicized.

(The VP has been doing this ever since. Just help. The Vice President is also game to do the same for Davao — unless it gets politicized again.)

Robredo said Davao City may want to take a look at what other cities did to deflect a surge in COVID-19 cases.

(If you look at it now that it has started to spike, in Cebu, it looks like it’s controlled, right? It looks like it is controlled and there are a lot of things they did—the partnership there is not just with the LGU but the medical community there is also very active.)

(So, I think the lessons in Cebu are the same. Davao City can pick up some lessons.)

Responding to this remarks of Robredo, Duterte-Carpio said the Vice President should “refrain from giving advice if she knows nothing about what is happening on the ground.”

But Robredo’s fears about Davao City are not unfounded as data from analytics group OCTA Research last June 8 indicated that Davao City has already surpassed Quezon City in terms of the average number of new COVID-19 infections for the past seven days.

Rumors have it that both Duterte-Carpio and Robredo may be eyeing the presidential seat in next year’s elections with the former being seen as the standard-bearer of the administration while the latter being considered the opposition’s candidate.

However, none of the two have so far confirmed if they would indeed vie to succeed Duterte in 2022.