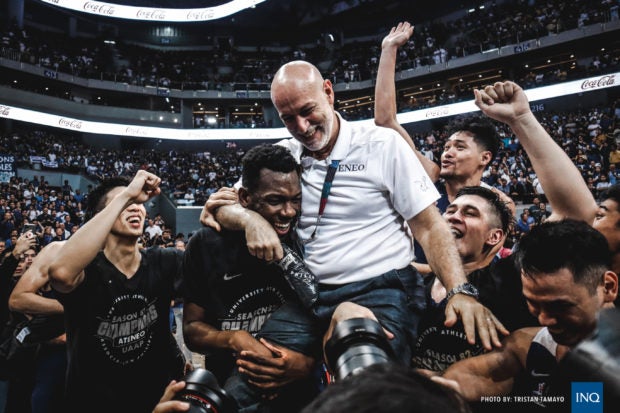 Tab Baldwin (in white shirt) and Ange Kouame will be looking to have celebrations like this internationally. —TRISTAN TAMAYO/ INQUIRER.NET

“I’m hoping that my international coaching experience and familiarity with our playing systems will be an additional asset to the team in the upcoming challenges the team is facing,” Baldwin said in a statement.

“I am honored to continue working with this outstanding coaching staff as we strive to take these next steps forward in the direction we envision for [the] 2023 (Fiba World Cup),” added the American-Kiwi mentor who coached Gilas with relative success from 2015 through 2016.He is set to coach Gilas in the Asia Cup Qualifiers (ACQ) in Clark Freeport and the all-important Olympic Qualifying Tournament (OQT) in Serbia.

In reinstating Baldwin, the national federation not only taps someone who previously held the coaching post but also puts in charge—totally—the brains behind the program designed for the 2023 World Cup that the Philippines will cohost with Japan and Indonesia.

“Basically, the reason is that it is his program. Being it his program, he wants to make sure that all the adjustments to be going are all in accordance to his preferences,” said Ryan Gregorio, the special assistant to SBP president Al Panlilio, in a virtual presser later that day.

“And he understands international play better than all of us or his coaching staff,” he went on.

Kouame served Baldwin at Ateneo, one of the leading varsity programs in the land, and that familiarity should come handy not only in the ACQ where two matches against old tormentor South Korea await the Filipinos, but also in the OQT that starts on June 29, where the Philippines gets a chance to finally return to the Summer Games, an absence that has spanned for 49 years.

Not sure of Kai

The same could be said for several players in the Gilas pool: Isaac Go, Matt and Mike Nieto, Will Navarro and Dwight Ramos, all of whom have played for Baldwin in varying capacities.

Meanwhile, Kai Sotto’s stint with Gilas in the ACQ remains up in the air, as announced by the SBP.

“As to whether we will see him right away, I’ll give you a more definite answer in the next few days. But right now, we’re just happy he’s with the team,” Gregorio said. Sotto and the rest of the Philippine delegation arrived at Quest Hotel in Clark Freeport Sunday afternoon.

“He will still be evaluated in terms of his match fitness, that’s part of my discussion with coach Tab,” added Gregorio Sotto, who returned to the country on June 1, is coming off a government-mandated quarantine. The 7-foot-3 teen prodigy, who recently signed with Aussie club Adelaide 36ers, is among the towering triumvirate being groomed to banner the Philippine team in the 2023 World Cup.

The timing of his arrival, however, has cost Sotto adequate training time with the cadet-laden pool handled by Baldwin.

If cleared, Sotto can complete a truly towering front line with the 6-foot-10 Kouame.

“The players are responding very well to the system and to each other. Bumps along the road are inevitable due to their youth and relative lack of experience, but these could be double-edged swords too,” Baldwin said of his squad when asked what a team of youngster could do compared with a squad of professional players.

“I know that when push comes to shove, these men will not only move forward, but more importantly, they will rise up because of the energy, athleticism and determination granted to them by their youth,” he added.

Baldwin’s finest moment as Gilas coach came in 2015 in China, where he led a squad bannered by Andray Blatche and PBA stars where they beat regional powerhouse Iran before settling for the silver medal behind the Chinese in a controversial title match.

“This is a developmental team that is not eyeing perfection, but progress,” Baldwin said.

“When you plan for things in the long run, you prioritize progress more than perfection because it allows for more opportunities to grow and learn. This is what I believe can make us worthy of a spot in the 2023 world stage.” INQ