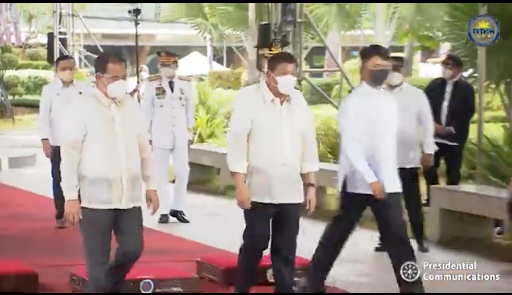 MISSTEP. President Rodrigo Roa Duterte walks away from a platform where moment before he almost tumbled upon turning. Duterte was in Malolos, Bulacan to lead the celebration of the 123rd anniversary of the proclamation of Philippine independence. Screengrab from RTVM video

MANILA, Philippines — Malacañang on Monday assured the public that there is nothing to worry about President Rodrigo Duterte’s health after he slipped from the podium during the Independence Day rites last Saturday, June 12.

“Malinaw naman sa video that the President was turning on a podium. Medyo na-out-of-balance lang, wala naman problema sa kalusugan,” he said in a Palace briefing.

(It was clear in the video that the President was turning on a podium. He only lost his balance, there is nothing to worry about regarding his health.)

Roque said the President will address the nation on Monday night to announce new quarantine classifications in some areas in the country, including NCR Plus.

The President skipped last year’s Independence Day celebration at Rizal Park to avoid drawing crowds that may lead to the spread of the new coronavirus.

His attendance on Saturday was only his second time being physically present during an Independence Day commemoration since he became president in 2016.