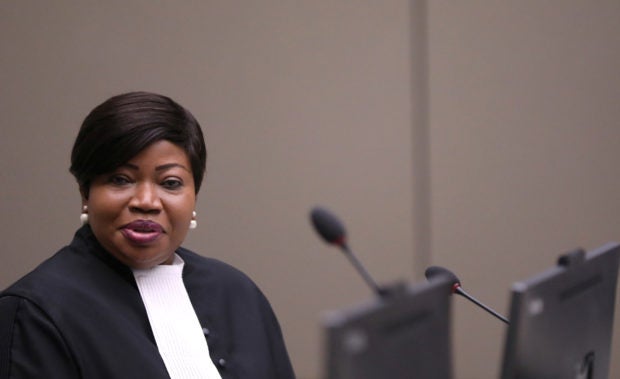 MANILA, Philippines — The International Criminal Court (ICC) has formally requested judicial authorization to proceed with an investigation of the crimes against humanity case filed against President Rodrigo Duterte, having finished the preliminary investigation of the complaints filed by local groups.

“As I stated in December 2019, at the annual session of the Assembly of States Parties, before I end my term as Prosecutor of the International Criminal Court (“ICC” or the “Court”), I intend to reach determinations on all situations that have been under preliminary examination during my tenure, as far as I am able to do so in accordance with my obligations under the Rome Statute,” ICC Prosecutor Fatou Bensouda said in a statement posted on the ICC website.

“On the basis of that work, I have determined that there is a reasonable basis to believe that the crime against humanity of murder has been committed on the territory of the Philippines between 1 July 2016 and 16 March 2019 in the context of the Government of Philippines ‘war on drugs’ campaign,” she added.

Last December 2019, the ICC vowed to continue assessing the complaints against Duterte even though the Philippines had withdrawn from the Rome Statute, which instituted the ICC. The ICC said that it still had jurisdiction over the case as it had been filed before the withdrawal.

The complaint was drawn up by the Rise Up for Life and Rights, which is composed of drug war victims’ relatives and other rights advocates.

Then in December 2020, ICC the said that it had a reasonable basis to believe that crimes against humanity were committed in the drug war.

ICC to continue assessing complaint vs Duterte; findings out in 2020